Shops and business are running as usual and a steady stream of visitors to the temples makes everything look normal. 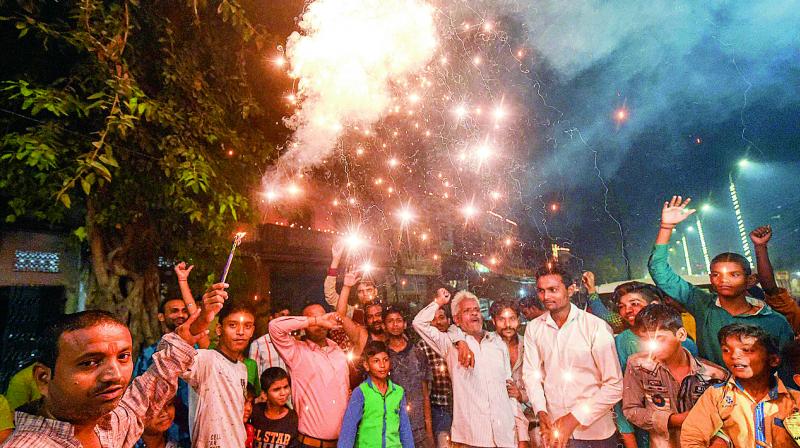 Residents of Sadatganj area in Ayodhya burst fire crackers outside their houses on Saturday to celebrate the Supreme Court’s judgement to give dispute land to Hindus for the construction of a Ram temple, ending decades-long litigation. (Photo: PTI)

Ayodhya: The OB vans — at least 10 of them — have just about managed to squeeze themselves into the premises and are parked alongside heaps of stone slabs and carved pillars — which lie in dust, waiting to be put together to become the “bhavya” (grand) mandir for Ram Lalla.

Tense-looking anchors and their crews are sweating it out under the hot sun; many of them have to put on their make-up again and again to look their best on screen. Like them, their high-end cameras and other equipment work non-stop to bring to you “dangal” and a host of interviews, which of course, promise to be nothing less than “explosive.”

The high octane mandir-masjid debates, uncomfortable and pointing questions — some of which run the risk of igniting passions — fill the air as members of both Hindu and Muslim communities slug it out as anchors do their best to pit one against the other. The stone slabs and pillars for Ram Lalla are mute witnesses. This is the scene at the Ram Janmabhoomi Nyas (trust) workshop in Karsevakpuram, the place where work on pillars and slabs for the proposed grand Ram temple has been going on since years, except for a brief closure in the wake of the Supreme Court judgment.

It is only on these premises that a “tense” atmosphere prevails throughout the day and well into late evening due to the frenzied media activity. The rest of Ayodhya and Faizabad appear calm and peaceful.

While the heightened security across Faizabad and Ayodhya can make one jittery, a visit to the Hanuman Garhi, Kanak Bhawan and Ram Mandir presents a picture of normality.

Shops and business are running as usual and a steady stream of visitors to the temples makes everything look normal. Except that to enter Ayodhya, one has to provide identity proof at five checkpoints.

All this just 24 hours after the historic verdict on the Ayodhya title suit which paves the way for construction of a temple on the spot where the Babri Masjid once stood.

The Muslim dominated localities appeared calm, though a sense of dejection was clearly evident as people went about their daily routine. The mood was sombre. The administration had banned all processions and rallies, which brought to a halt the Milad un Nabi celebrations.

Back at the Karsevakpuram, there was a huge deployment of policemen as all roads, though barricaded, led to the workshop.

Many passers-by dropped in to take selfies with some of the well known TV anchors, especially of the Hindi channels; others came in just to see what all the fuss was about and spent hours enjoying the “live shows.”

“Media guys have no other work but to make people fight through their shows for the sake of TRPs,” one of the onlookers remarked shrewdly to his friend.

Not surprisingly, all those from the BJP or VHP spoke about “Vikas” (development) and how Ayodhya will be developed in the time to come, now that the way to the Ram temple had been cleared. Some spoke of an airport to come up in Ayodhya while others spoke about more funds coming in to develop the infrastructure here.

Ironically, while the mandir and masjid debates went on endlessly at the venue, and so did the talk of how development would benefit the place with funds running into several crores of rupees, just outside the venue, several people seeking alms had gathered, one of whom, an aged man, could be seen pleading with each passer-by to show some mercy on him and donate at least one rupee so that he could have his meal.