Ayodhya verdict may spur another wave of Muslim ghettoisation. 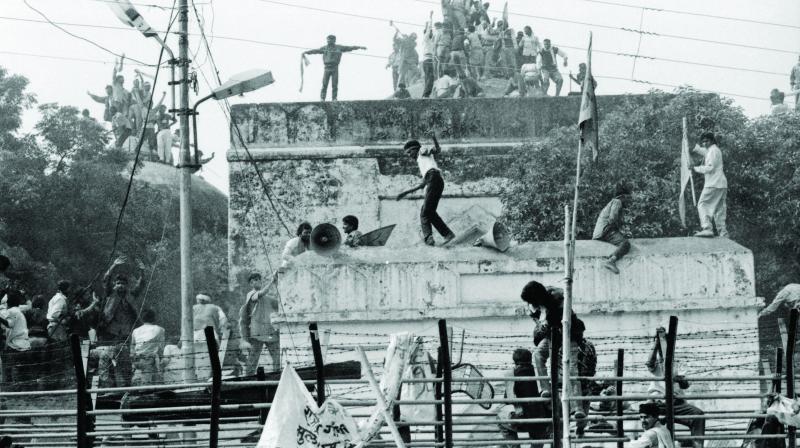 Hindu activists climb up the dome of Babri Masjid in Ayodhya which was quickly demolished by end of the day. (Photo: Sondeep Shankar)

New Delhi: It sounds tautological, but the first big wave of marginalisation of Muslims in Indian cities and towns, also known as ghettoisation, was triggered by the Partition. And it continued thereafter, spurred by the occasional riots, but reached a painful peak after the demolition of the Babri Masjid on December 6, 1992.

With the verdict in the Ram Janmbhoomi-Babri Masjid case announced on Saturday and the disputed site having been awarded to the Hindu side for the construction of Ram temple, the exodus of Muslims from mixed population areas to Muslim-concentrated areas (ghettos) may rise further.

Last week, as word spread that the Ayodhya verdict may be announced anytime between November 4-15, most likely during later dates, many young Muslims in Delhi-NCR region — both professionals and students — reportedly took leave to go to their hometowns or shift to Muslim areas. “Many of my friends who reside in Noida took leave from offices and were boarding trains to get to their hometown. Some have left, while some plan to leave next week. It happened after their parents called them and asked them to stay safe ahead of the Ayodhya verdict,” said Nissar Siddiqui, a Jamia Nagar-based journalist and research scholar. Panic-stricken parents were making calls to their wards to shift to safer places from areas where Hindus are in majority.

“When I saw the news of the Ayodhya verdict, the first thought that came to my mind was of my youngest brother who stays in one of those localities of Delhi (Mukherjee Nagar) where young students live with the dream of cracking civil services examinations and serving the country. Frantically I called my friends in Jamia Nagar to ask them if he could shift with them for a few days, although my brother assured me that he is fine there, and I should not worry. That in a nutshell explains the increasing ghettoisation of Muslims in particular in India,” Dr Mohammed Reyaz, a professor at Aliah University in Kolkata.

Dr Reyaz, who spent most of his adult life in Kolkata and Delhi, witnessed the ghettoisation of Muslims since his childhood.

He explains that this trend predates 1992 Babri Masjid demolition and the resultant communal violence unleashed throughout India, but feels that the events of 1992 gave it impetus and made it more visible. “The trend had begun quite early I would say, but, yes, after 1992 it became more visible. Take, for example, Kolkata areas like Ballygunge, Beliaghata, Selimpur and migrating to these places,” he said. Such ghettoisation has been documented by international scholars like Laurent Gayer and Christoffe Jaffrelot in their seminal work, Muslims in Indian Cities: Trajectories of Margin-alisation. According to these writers, it’s only in cities that communal fears pushed Muslims to ghettos, while in rural areas they still live in mixed societies. They called Muslim ghettos in Indian cities the “neighbourhoods of exile”.