Seshan took the job to revamp whole system when Indian elections were flooded with booth rigging and misuse of the government machinery. 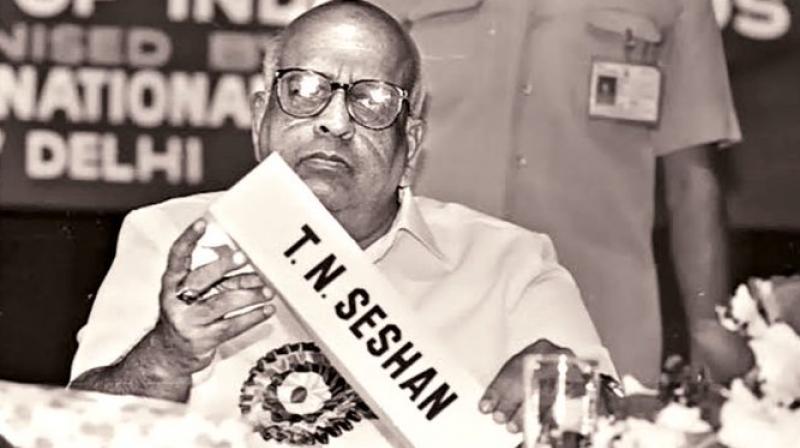 He had earlier served as the 18th Cabinet Secretary of India in 1989. In 1996, he won the Ramon Magsaysay Award. (Photo: Twitter)

He was the 10th Chief Election Commissioner of India (1990–96), who reformed elections by largely ending its malpractices in the country and redefined the status and visibility of the Election Commission of India. He took the job to revamp the whole system when the Indian elections were flooded with booth rigging and misuse of the government machinery.

Some of the reforms he implemented included enforcement of election code of conduct, voter IDs for all eligible voters, limit on election candidates' expenditure, appointing election officials from states other than the one facing polls. He had identified more than hundred electoral malpractices and reformed the process. He curbed several malpractices like bribing or intimidating voters, distribution of liquor during elections, use of government funds and machinery for campaigning, appealing to voters' caste or communal feelings, use of places of worship for campaigns, use of loudspeakers and high volume music without prior written permission.

Under his strict watch and reforms he introduced, in the 1993 elections, in Uttar Pradesh, booth capturing count fell to 255 - from 873 in 1991. The number of polling day killings also fell from 36 to three. The number of constituencies in which polling had to be suspended or deferred, also dipped to three compared to the previous 17. In all states, dry days were declared six days before polling.

In 1994, in a move that sent shockwaves through the political establishment, he denounced the then Welfare Minister Sitaram Kesari and Food Minister Kalpnath Rai for attempting to influence voters, and asked the then PM to remove the two from office.

In the 1996 general elections, the Election Commission deployed 1,500 observers - of three per constituency - for monitoring the elections. Polling stations were run by around 1.5 million state employees, while over 600,000 security personnel were deployed.

Soon, Seshan became a known name by the masses who appreciated him for curbing the tactics used by the political parties and leaders. However, the same actions that garnered him praise from the citizens made him the most disliked CEC by most political leaders and parties.

Seshan, an IAS officer of the 1995 batch, once told an interviewer: "I had never conducted an election. I went with two principles: zero delay and zero deficiency.” He followed both throughout his tenure.  His strict policies earned him the title “Al Seshan”.

He had earlier served as the 18th Cabinet Secretary of India in 1989. In 1996, he won the Ramon Magsaysay Award. Seshan even contested for the post of President of India in 1997 and lost to KR Narayanan.