'If Jinnah was made PM...': OP Rajbhar's remarks stir controversy 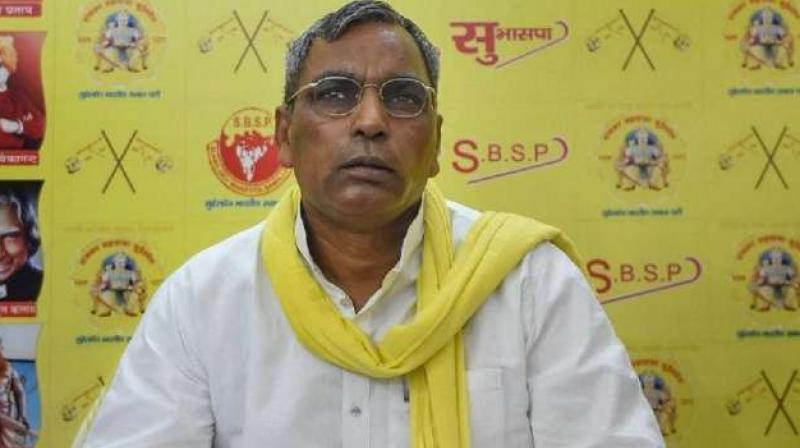 Ballia: A day after saying that there would have been no partition if Muhammad Ali Jinnah was made the first prime minister of the country, Suheldev Bharatiya Samaj Party (SBSP) chief Om Prakash Rajbhar blamed the RSS on Thursday for the historic event.

Reiterating his stand, Rajbhar said if Jinnah was made the first prime minister of independent India, there would have been no partition, India would have been a big country and all kinds of problems would not have arisen.

"The Rashtriya Swayamsevak Sangh (RSS) is responsible for India's partition and not Jinnah. The state of dispute was created by the Sangh itself," he told PTI.

The SBSP chief said leaders like Atal Bihari Vajpayee, LK Advani and Govind Ballabh Pant had praised Jinnah, who had contributions in the country achieving independence.

"He fought for the country," he said while asserting that after independence, Jinnah should have been made the prime Minister.

In the wake of his poll ally Samajwadi Party chief Akhilesh Yadav speaking about Jinnah in the same breath as Sardar Vallabhbhai Patel, Mahatma Gandhi and Jawaharlal Nehru as freedom fighters, drawing criticism from BJP leaders including Uttar Pradesh Chief Minister Yogi Adityanath, Rajbhar had on Wednesday said the partition of the country could have been avoided by making Jinnah the prime minister.

Addressing a public meeting in Hardoi recently, Yadav had said, "Sardar Patel, Father of the Nation Mahatma Gandhi, Jawaharlal Nehru and (Muhammad Ali) Jinnah studied in the same institute and became barristers. They helped (India) get freedom and never backed away from any struggle."

To a question on mafia-turned-politician Mukhtar Ansari, Rajbhar, who recently met the Mau MLA in the Banda jail, alleged that BJP leaders contributed the most in making Ansari a lawmaker.

"BJP leaders made Mukhtar Ansari victorious," he said, adding that he has proof to substantiate his claim.

The SBSP leader also claimed that Akhilesh Yadav and his estranged uncle Shivpal Singh Yadav, who has floated his own political party, will be united soon.

"When Shivpal Yadav is ready to merge his party with the SP, there is no problem in both the leaders coming together," he said.