India   All India  11 Dec 2018  Utilise Parl for public interest rather than individual: PM to lawmakers
India, All India

Utilise Parl for public interest rather than individual: PM to lawmakers

The session will have 20 sittings spread over a period of 29 days, is expected to be used by Opposition parties for raising several issues. 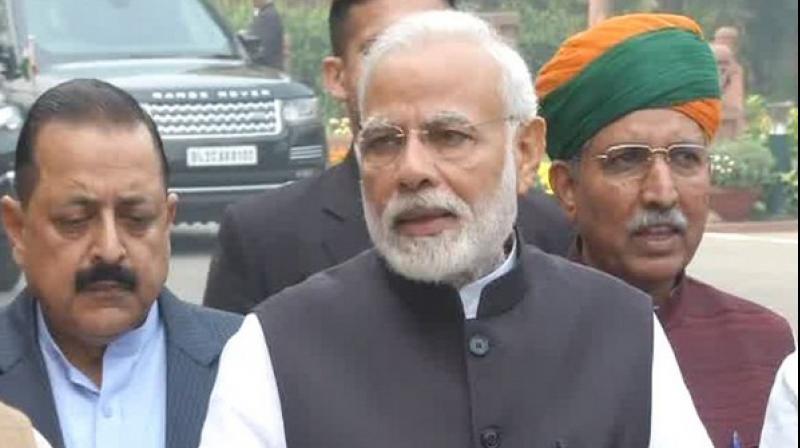 Addressing the floor leaders, Prime Minister Modi said, 'The government is always receptive to the issues raised by all political parties.' (Photo: ANI)

New Delhi: Prime Minister Narendra Modi on Tuesday urged all parties to utilise the Winter Session of Parliament for public interest rather than individual interests.

Speaking outside Parliament before the start of the session, the Prime Minister asked leaders of various political parties to participate in debates, discuss issues of public interest and work towards resolving them.

PM Modi hoped that the session would be constructive and members would participate in debates on key issues concerning the public, even if sharper.
The Prime Minister also appealed all political parties to ensure smooth functioning while assuring that all issues would be discussed in the House.
He hoped the Winter Session would function more than its stipulated time.
"I am confident that political parties will keep public interest in mind and make use of this session to utilise it for furthering public interests and not parties interests," he told reporters. PM Modi said this Winter Session of Parliament is important and everyone should participate in discussion.

"There should be debate, discussion and dialogue," he said.

The Winter Session of Parliament starts on Tuesday and will end on January 8.
The session, which will have 20 sittings spread over a period of 29 days, is expected to be used by the Opposition parties for raising several issues like Rafale deal and alleged government interference in the functioning of institutions like the Reserve Bank of India (RBI) and Central Bureau of Investigation (CBI).

The government on Monday held a meeting with leaders of all the parties to discuss how the session could be run smoothly.

Addressing the floor leaders, Prime Minister Modi said, "The government is always receptive to the issues raised by all political parties."