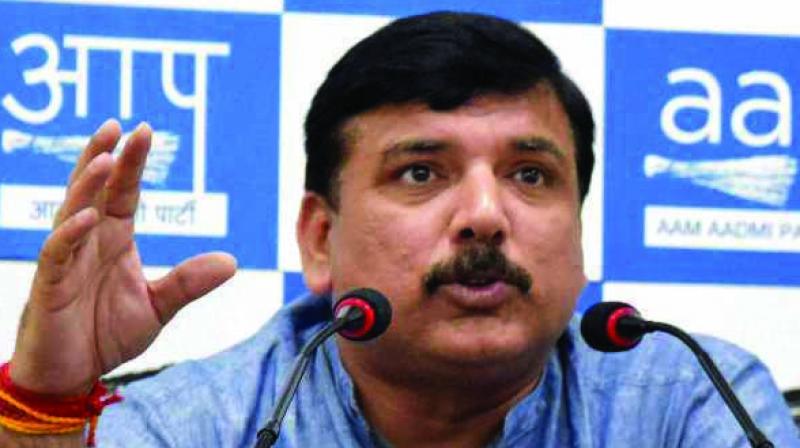 'The results of assembly polls indicate that people are fed up with jumla (rhetoric).' Singh said the BJP should seek votes for the work it has done and not in the name of building Ram Temple in Ayodhya. (Photo: File)

New Delhi: India will be "BJP Mukt" in the year 2019, the Aam Aadmi Party claimed Tuesday, as assembly election trends indicated that the saffron party was trailing in two of the three states it ruled.

The Bharatiya Janata Party was behind its main rival Congress in Rajasthan and Chhattisgarh; it was locked in a close contest with the opposition party in Madhya Pradesh, according to latest trends.

Lok Sabha elections are due next year and the assembly polls were billed as a semi-final before the general elections.

"The results of assembly polls indicate that people are fed up with jumla (rhetoric)." Singh said the BJP should seek votes for the work it has done and not in the name of building Ram Temple in Ayodhya.

The AAP leader said farmers, youths, traders and women are "not happy" with BJP's policies due to which the party seems loosing ground in the states it ruled. On AAP's performance in the assembly polls, Singh said his party fought elections with limited resources and its leadership.

"It is a start for us. Our local leadership with limited resources fought the elections and worked hard," he said.

Assembly election were held in five states. In Telangana, the TRS was set form its second successive government and in Mizoram, the Mizo National Front was likely to bounce back to power after 10 years.

The AAP had fielded candidates in Chhattisgarh, Rajasthan, Telangana and Madhya Pradesh.