In the city’s Maligaon area, a government-run bus was pelted with stones and a scooter set on fire. 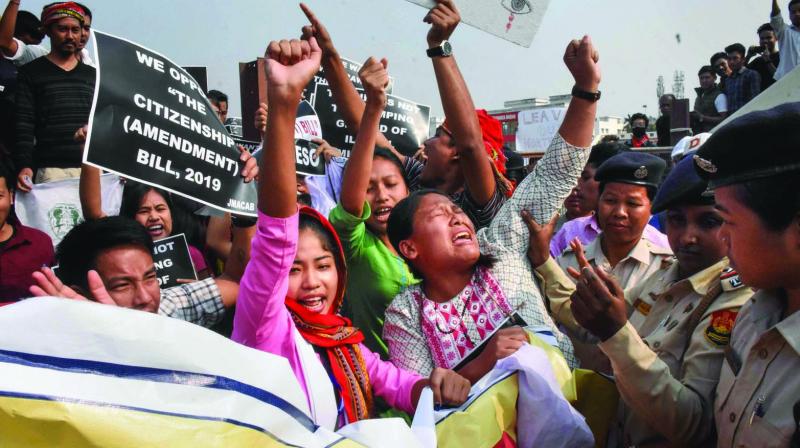 Demonstrators raise slogans against the Citizenship Amendment Bill during a strike called by the North East Students’ Organisation in Agartala. (Photo: PTI)

Guwahati: Barely hours after the Citizenship (Amendment) Bill was passed by the Lok Sabha, normal life was paralysed in Assam’s Brahmaputra Valley where a dawn-to-dusk bandh was called by the powerful All Assam Students Union (AASU) on Tuesday.

However, the bandh failed to evoke much impact in the Bengali-dominated Barak Valley and the two autonomous hill districts of Karbi Anglong and Dima Hasao.

Amid the ongoing protests against the Citizenship (Amendment) Bill, the National Award-winning filmmaker Jahnu Barua on Tuesday decided not to participate in the 8th Assam State Film Awards and Film Festival 2019, that is due to take place in Guwahati on December 26-27. In a major setback for the film festival, Barua, one of Assam’s top filmmakers, also decided to withdraw his film Bhonga Khirikee (Broken Window) from being screened at the festival. Bhonga Khirikee was produced by actress Priyanka Chopra and released in October last year in Assam and elsewhere in the country.

Barua was not the only artiste, many other artists, singers and musicians came out on the streets of Guwahati to register their musical protest by singing motivational songs against the CAB.

In the city’s Maligaon area, a government-run bus was pelted with stones and a scooter set on fire. Shops, markets and business establishments kept their shutters down, while educational institutions and banks remained closed for the day.

The protesters, raising slogans against the CAB, took out marches in different areas of Guwahati. Security sources said they were forced to change the route of several VIPs including ministers to avoid any clash. Assam CM Sarbananda Sonowal’s travel plans were also changed in view of the protests by students all over the city.

The agitators also had a scuffle with the security forces near the Secretariat and Assembly in Guwahati, as they were prevented from entering the high-security zone.

Train services across Assam were affected as picketers squatted on the tracks, a railway spokesperson said. Some protesters also tried to block the entrance to the Northeast Frontier Railway headquarters and divisional railway manager’s office at Rangia. The security forces, however, defused the situation by removing protesters.

Vehicles — both private and public — stayed off the roads, official sources said, adding that government-run Assam State Transport Corporation buses plied between Guwahati city and the airport here, with police escorts. All scheduled exams were rescheduled by universities in view of the bandh.

Several protesters of Asom Jatiyatabadi Yuba Chhatra Parishad, including general secretary Palash Changmai, were detained by the police while holding a protest at the Assam Secretariat with black flags.

Torchlight processions were taken out by AASU in Diphu, Hajo, Jamuguri and other parts of the state that are dominated by indigenous communities.

In Dibrugarh district, bandh supporters clashed with CISF personnel. Three of them sustained injuries as they tried to prevent the workers of Oil India Ltd to enter the office at Duliajan. Protesters burnt tyres and blocked the national highways to stop the movement of vehicles in various parts of Assam. Several foreign and domestic tourists were stranded at Kaziranga National Park; but flights and trains remained on schedule.

Meanwhile, the ruling Sikkim Krantikari Morcha and chief minister P.S. Tamang has written a letter to Union home minister Amit Shah requesting that Sikkim be exempted from the purview of the CAB. SKM was the only regional Northeast party to have voted against the CAB in Parliament.