'Don't need to prove how staunch Hindu we are': Shiv Sena opposes CAB in RS

The Sena does not need to prove how 'staunch Hindu' and 'patriotic' the party is, Sanjay Raut said. 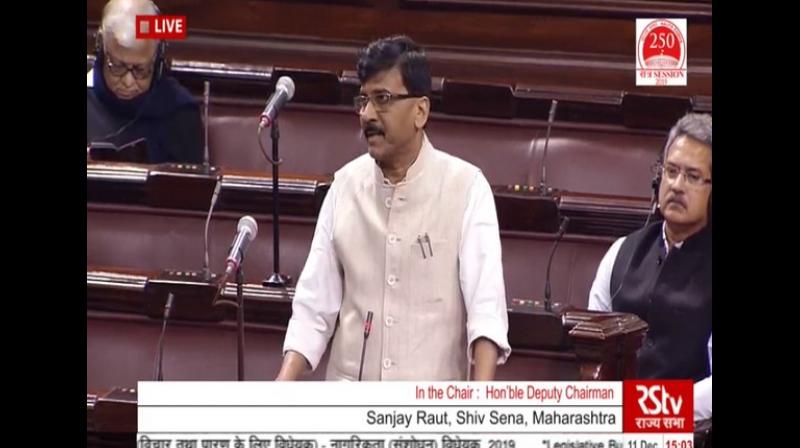 'We should discuss this Bill based on humanity not on religion. There is a difference between intruders and refugees,' said Raut, whose party is a former ally of the BJP. (Photo: ANI)

New Delhi: The Shiv Sena, which voted in favour of the controversial Citizenship (Amendment) Bill in Lok Sabha, opposed it in Rajya Sabha on Wednesday, saying the draft law should have been debated on the basis of "humanity not religion".

The Sena does not need to prove how 'staunch Hindu' and 'patriotic' the party is, Sanjay Raut said while participating in a debate on the Bill in the Upper House.

"We should discuss this Bill based on humanity not on religion. There is a difference between intruders and refugees," said Raut, whose party is a former ally of the BJP.

The Sena recently formed government in Maharashtra along with the Congress and the Nationalist Congress Party (NCP).

The Bill, which is being debated in Rajya Sabha, seeks to grant Indian citizenship to non-Muslim refugees from Pakistan, Bangladesh and Afghanistan escaping religious persecution there.

Throwing intruders out of the country has been a commitment of Union Home Minister Amit Shah and it was promised during election rallies also, Raut said.

He said there should not be any "vote-bank politics" while giving citizenship to non-Muslim minorities under the Bill and added that there will be "some balance" if voting rights are not given to them for 25 years.

The Sena member also attacked some MPs who said on Tuesday that those opposing the Bill were 'traitors' and "speaking the language of Pakistan".

"We don't need any certificate to prove how patriotic we are and how staunch Hindu we are. We are headmaster in a school that you study. Our school headmaster was Bal Thackeray and Atal (Bihari Vajpayee) ji and Syama Prasad Mookerjee. We believe in them," he added.

This is not the Pakistan assembly. People in India have voted for members sitting in the treasury as well as opposition benches, the Sena MP said.

"If you don't like Pakistan's language, there is a majority government which can eliminate Pakistan. We are with you," he said, adding that the party supported the government in revoking Article 370.

He also said there is protest against the Bill in many parts of the country. There is violence in Assam, Tripura and Manipur.