Rajni was going to school in her village and loved her books, games and learning. 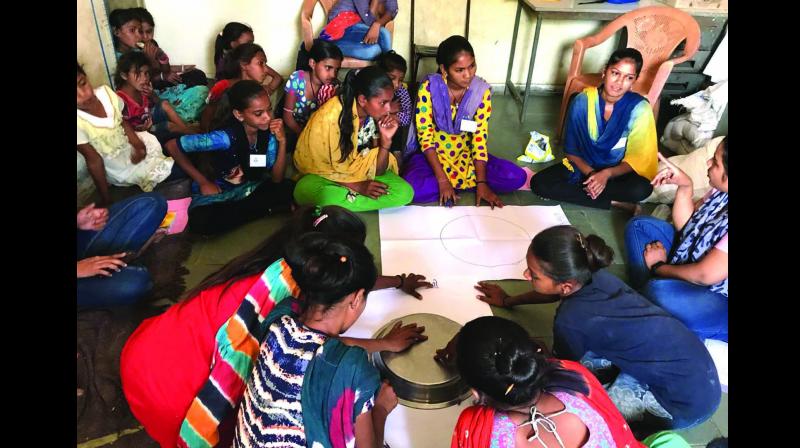 Strengthening of vocational skills and provision of jobs was an issue raised by many young people. Though many came from farming families, they said agriculture was no longer able to sustain small farmers.

A major concern of Rajni Chandra (name changed) 20, doing her B.Ed from the RNT College, Kapasan, Chittorgarh District of Rajasthan is child marriages. Having got over the nightmare of being pushed into marriage when she was just six years to a boy who was three years younger than her, she maintains child marriages are the bane of girls across the country but more so in Rajasthan. Her older sister, 18, was getting married and her parents decided why not marry the younger one too and save on marriage expenses. It was Akha Teej, the crop had been harvested and hundreds of marriages were being solemnized. "Gudda, guddi ki khela tha"(a dolls marriage), she says.

Even today she and her friends maintain "alliances for marriage are struck between families when the children are just toddlers". Marriages are also arranged overnight because grandma is getting old and she would like to see her grandchild married. No one bothers about the child's future. Will and can the marriage be sustained in later years!

Rajni was going to school in her village and loved her books, games and learning. She wanted to be a teacher but by the time she was 13/14, there was pressure from the in-laws to send their bride home so that she could help with household chores and become their bahu (daughter-in-law). Rajni protested and insisted on completing her studies. There were several rounds of tear filled discussions with her parents. Discreet inquiries revealed that the boy had gone astray and had developed bad habits like drinking. Finally, Rajni's determination won and the marriage was called off. At 15/16, Rajni was a divorcee but a happy one.

Rajni was one of the participants at YouthBol meetings organized by Ahmedabad based NGO Chetna in collaboration with its local partner Navachar Sansthan in Kapasan earlier this year. Over 7000 youth of 10 to 24 years from 19 districts of the State raised their voice on the concerns and aspiration of the young. These were compiled with the responses from over one lakh youth from other parts of the country. Most of the questions revolved around their health needs and aspirations.  The data collected was analyzed by Delhi based NGO C3, to be shared with those making policies and programmes for young people, particularly education and health at Centre. The youngster spoke their minds about lack of job opportunities, the need for skills, their concerns on addictions of various kinds and poor quality of education in government schools and health services in rural India. They wanted information on human trafficking and sexual health.  Even when a chapter on sexual and reproduction health is included in a text in senior school, it is not taught was an important criticism.

In Rajasthan, young people wanted the government to stop sale of tobacco, drugs and alcohol, all three seen as the new emergencies of the 21st century. Shut liquor vends, they pleaded. "We need solutions to quit tobacco chewing," a 16 years girl from Gujarat said. In addition to greater awareness about the harmful effects of banned substances, they also wanted information on unconventional addictions like paint thinners, whiteners and mentholated ointments like Vicks. Though the sale of alcohol, cigarettes and paan masalas was banned near schools and colleges, it was still easily available, they said. Many said their teachers too smoked and chewed tobacco so how could they counsel them against smoking. Every state, they said should have an adolescent helpline for substance abuse and good quality, free de-addiction and rehabilitation services.

Good toilet facilities in government schools and college also got high priority as important for health and well-being of young people.  While girls raised the issue of toilets, the young men said they too needed good, clean toilets. Dust bins and toilets should be part of the Swachh Bharat Abhiyan. Menstruating days are a big problem for girls in schools and colleges, more so in the government ones in rural areas.

Girls said there was no onethey could turn to when they were in pain and schools and colleges did not provide sanitary napkins,

Young people from rural areas also flagged the need for improved health facilities and hospitals in villages and small towns. They should be well equipped with MBBS doctors and specialists providing services. Many lives, they said, were lost in accessing good health care facilities in rural out-backs.

Strengthening of vocational skills and provision of jobs was an issue raised by many young people. Though many came from farming families, they said agriculture was no longer able to sustain small farmers. "Our parents tell us to study and get jobs outside the farm sector. Many of us want to be teachers so that we get government jobs and a steady income. Having suffered from the inadequacies of government schooling, we will ensure government education is as good as private education, if selected, a B.Ed student assured. Young people are also keen on developing skills that will give them greater opportunities for employment as adults. They want good vocational education in schools. If we were exposed to a range of skills at the school level we would know the job avenues that we could pursue in out higher education." Many said school education should equip them to deal with banks, shops and different aspects of life.

Yamini Chasta was concerned about the lack of education and opportunities for the differently abled in rural Rajasthan. They are treated as second class citizens and not provided education with normal kid! Yamini was speaking from her personal experience as the younger sibling of her 30 year old sister who had the IQ of a five year old. Though she benefitted from school education, she could not complete it because of her age and there is no scope for further education for her.

However, nothing could deter 20-year-old Patni, who suffered from a physical disability from pursuing her dreams. Till the 10th class she studied in the village school, did her eleventh and twelfth from Kapasan with a scholarship given to her as an OBC. Currently she is doing her B.Ed from the RNT College at Kapasan. Patni travels by bus to college and finds that boys actually offer their seats to her in a bus, "It all depends on the attitude of your village, she says. "I have no problems because of physical handicap. In fact I enjoy the attention I get. In a bus I am assured of a seat and everyone lets me climb on to the train first when it steams onto a platform.

Many of these concerns of the young will hopefully be addressed in the new policies in education, health and adolescents.