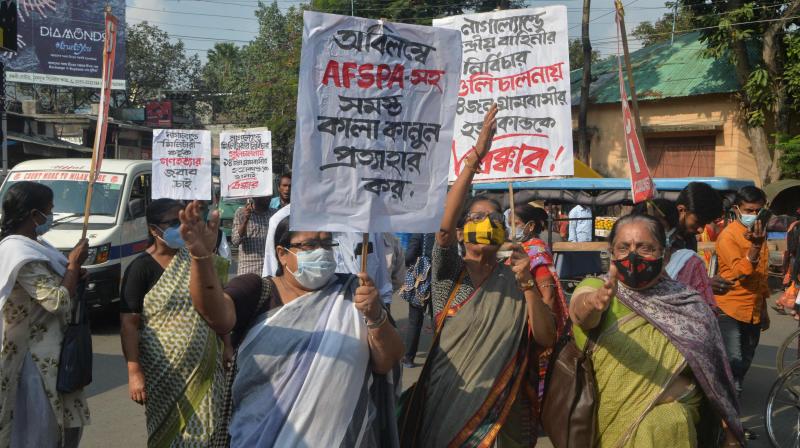 Supporters of Socialist Unity Centre of India shout anti government slogans as they protest over the killing of 14 civilians by Indian security forces in Nagaland days before, in Siliguri. (Diptendu DUTTA / AFP)

Guwahati: Amidst the growing demand for repealing the Armed Forces (Special Power) Act in north-eastern states, the Nagaland government on Friday decided to convene a special session of the state Assembly on December 20 to discuss the Naga political issue and AFSPA in the backdrop of the Oting firing incident in which 14 civilians were killed.

The decision to hold the special Assembly session was taken by the core committee on the Naga political issue headed by chief minister Neiphiu Rio, which held an emergency meeting in Kohima on December 9 and discussed AFSPA in the state.

The Nagaland governor has also given assent for the special session.

After laying a wreath on the mortal remains of the victims on Monday, the chief minister had called for scrapping the "draconian Act".

Tribal organisations and civil societies, including the Naga Students Federation and women's groups, have also been asking the state government to hold a special session of the Assembly and pass a resolution for repealing the Act.

Meanwhile, the Isak-Muivah faction of the National Socialist Council of Nagaland, or NSCN (I-M), has said that the “Indo-Naga” political talks will not be meaningful under the shadow of the Armed Forces (Special Powers) Act, 1958.

Referring to the December 4 killing of 14 civilians by the armed forces at Oting village in Nagaland’s Mon district, the NSCN (I-M) said that it has now been driven to the point of taking a stand on the draconian AFSPA.

“This notorious AFSPA has given the Indian security forces the license to shoot and kill anyone on mere suspicion... The Nagas have had the bitter taste of this act on numerous occasions and it has spilt enough blood. Blood and political talks cannot go together... No political talks will be meaningful under the shadow of the AFSPA,” the outfit said.

“Let human dignity take control and be made an integral part of the Naga political peace process. Unfortunately, the Oting killing has become a threat to the Nagas’ longing for Naga political solution.” It said the Central government must immediately withdraw AFSPA if it wants to do justice to the Naga people.

The NSCN (I-M) also issued a strong rebuttal to the statement of Union home minister Amit Shah in the Parliament on the December 4 incident.

"In a situation like this, Mr Shah was expected to show political maturity and statesmanship to cool down the socio-political upheavals. But he poured fuel on the burning issue by standing behind the heinous act of killings by the para commandos, which was like rubbing salt in the wounds of the Nagas," it said.

The North East Students’ Organization (NESO) coordinator, Pritam Sonam, called  AFSPA a protectorate Act for the armed forces to use against civilians. “Armed forces are using it just to harass and kill innocent people and rape,” he said. He said that NESO has been protesting against the Act for the past 20 years and will continue to do so until it is repealed.

“No problem or dispute will ever be solved at gunpoint. It can only be solved through negotiations, meetings and development,” he added.