India   All India  12 Jan 2018  No visitors, no dahi chura, Lalu complains of being treated as commoner
India, All India

No visitors, no dahi chura, Lalu complains of being treated as commoner

In response to Lalu's complains, the judge asked him to go to an open jail and keep waving to his supporters all day. 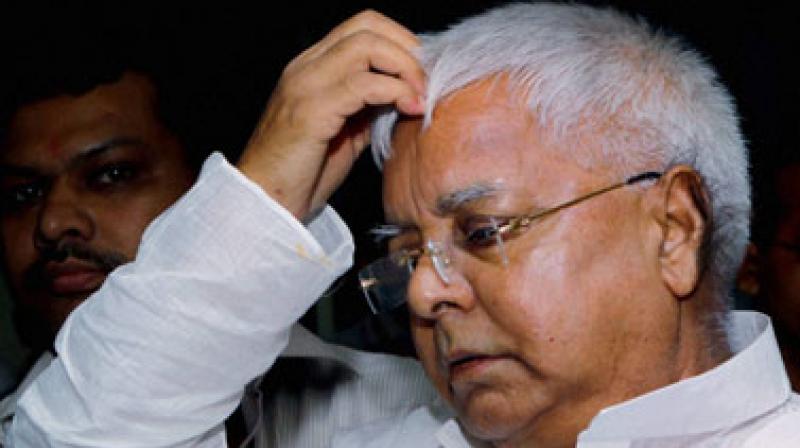 On being asked if he was facing problems in jail, Lalu said that jail authorities are not letting him meet his party (RJD) leaders or allowing other visitors. (Photo: PTI)

Ranchi: Despite being sentenced to 3.5 years in prison only four days ago, Lalu Prasad Yadav's cheeky humour has not been dented.

Lalu engaged in light humour with even special CBI judge, Shivpal Singh, who passed his sentence, before attending the proceedings for the Dumka treasury case.

The conversation that followed made everyone, present in the courtroom, laugh briefly according to witnesses present on the spot.

On being asked if he was facing problems in jail, Lalu said that jail authorities are not letting him meet his party (RJD) leaders or allowing other visitors.

To this, CBI Judge Shivpal Singh replied that visitors will only be allowed following the jail manual, adding that Lalu should move to the open jail at Hazaribagh, about 150 km from Ranchi.

Lalu shot back immediately and invoked the rule-book, saying the open jail was for naxals and only those above 60 years and sentenced to more than 5 years in prison can go there. "You cannot send anyone without his consent," the 69-year-old Rashtriya Janata Dal (RJD) chief added.

The jail was opened in 2013 for naxals, convicts or undertrials, who are seen open to the idea of giving up weapons and returning to the mainstream. They can stay with their family in one of the 100 cottages built for them, earn a living and even pick up a skill or two during their prison stay.

This is not the first time Lalu has underlined the fact that apart from being a political leader, he is also a lawyer and registered to practice even at the Supreme Court.

"There will be genocide if the (party) workers are stopped in open jail. All the 20,000 policemen in Jharkhand will have to be deployed in the security," Lalu said, to which Singh replied that there will be no such incident.

"Go to an open jail and you can keep waving (to your supporters from a distance) through the day," the CBI Special Judge said.

Yadav also complained of being treated like a "common prisoner," in reply to which Singh asserted that the law will treat everyone equally.

With Makar Sankranti approaching, Yadav rued that this time he will not be able to have dahi-chura.

"We will have dahi-chura here itself. I will order it if you say," the judge replied.

Lalu's response was witty. "No sir, this is a thing of the Yadavs. If I eat dahi-chura with you, I might end up in a problem like Syed Shahabuddin of Siwan," he said, as the court room burst into laughter.

Since the Dumka treasury case has a similar set of evidence as the Deoghar case, Lalu is already expecting conviction.

He tried to convince Singh to give him a shorter sentence this time.