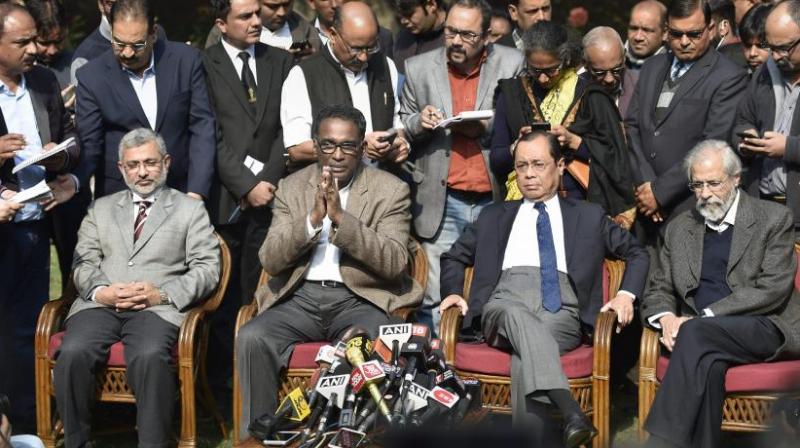 Four senior-most judges of the Supreme Court on Friday called a press conference and said the situation in the top court was ‘not in order’. (Photo: PTI)

New Delhi: Friday, the 12th January 2018, marked an extraordinary event in the history of the Indian judiciary. Four of the five top judges of the Supreme Court challenged the authority of the Chief Justice of India, Dipak Misra, at a press conference earlier in the day.

The unprecedented move was taken by Justices Jasti Chelameswar, Ranjan Gogoi, Madan Lokur and Kurian Joseph, who has claimed that there was a threat to democracy in the country as judiciary's independence is being compromised.

“Sometimes administration of the Supreme Court was not in order and many things which are less than desirable have happened in the last few months…unless the judiciary was preserved, democracy can’t be protected in the country,” they said at the press meet at Justice Chelameswar’s residence in Delhi.

They sent a seven-page letter to the CJI, (read below), saying while he was the "master of the roster", he was "only the first among equals – nothing more or nothing less". It looks like they did not agree with the allocation of work by Chief Justice Dipak Misra.

Who is Justice Chelameswar?

Justice Chelameswar is the second-most senior judge of the Supreme Court. He is known to speak his mind and has delivered several landmark judgements.

He delivered a dissenting judgement, when the five-judge bench of the Supreme Court quashed the al Judicial Appointments Commission (NJAC) Act, 2014, and the 99th constitutional amendment, thus the government’s say in the judges' appointments through NJAC.

“Proceedings of the collegium were absolutely opaque and inaccessible both to public and history, barring occasional leaks… Such a state of affairs does not either enhance the credibility of the institution or good for the people of this country,” he had said.

He was also the part of the Division Bench that referred a petition, demanding independent court-monitored SIT probe into the alleged medical college bribery scam, to a five-judge Constitution bench.

However, a day later, the CJI nullified the Division Bench’s order and set up a three-judge bench, which dismissed the petition.

Chalameswar was born on July 23, 1953, in Krishna district of Andhra Pradesh. He studied physics at Loyola College in Chennai and later went on to study law at Andhra Univeristy in Vishakapatnam.

Justice Gogoi, from Assam, is in line to succeed Justice Dipak Misra as the Chief Justice of India in October 2018. He will be the first CJI from a Northeast state.

Born on November 18, 1954, Justice Gogoi was enrolled at the Bar in 1978. After years of practising at the Gauhati High Court, he was appointed a Permanent Judge of the court on February 28, 2001.

He became the Chief Justice of Punjab and Haryana High Court on February 12, 2011, a year after being transferred there on September 9, 2010. Just a year later, on April 23, 2012, Justice Gogoi was elevated as a Supreme Court judge.

Justice Lokur, who will also retire by the end of this year, is known for his notable judgement, quashing Centre’s decision to provide 4.5 per cent sub-quota to minorities carved out of 27 per cent OBC reservation. He was then the Chief Justice of Andhra Pradesh High Court.

The very use of the words "belonging to minorities" or "for minorities" indicates that the sub-quota has been carved out only on religious lines and not on any other intelligible basis, the bench observed while setting aside the sub-quota.

Born on December 31, 1953, Justice Lokur did his schooling in Delhi attended St. Stephen's Collegiate in Allahabad for ISC examination. Before studying law from Faculty of Law, Delhi University, he graduated in History (Hons.) from Delhi Univeristy’s St Stephen’s College.

He was enrolled at the Bar in 1977 and practiced in the Delhi High Court and the Supreme Court. He was in 1981 appointed the Advocate-on-Record (AoR) of the SC.

Justice Joseph had in August last year ruled against the controversial triple talaq or or instant divorce practiced by some sects of Muslims. In his judgement he said: "I find it extremely difficult to agree with the learned Chief Justice that the practice of triple talaq has to be considered integral to the religious denomination in question and that the same is part of their personal law.

He is also part of the Supreme Court bench hearing the coal block allocation scam.

Justice Joseph was born on November 30, 1953, in Kerala and completed his schooling there. He studied law at Kerala Law Academy in Thiruvananthapuram.

Justice Joseph started practising in 1979 and was appointed as a judge of Kerala High Court in 2010. He was elevated as the Chief Justice of the Himachal Pradesh High Court in February 2010.

Justice Joseph, who will retire in November 2018, was appointed a judge in the Supreme Court on March 8, 2013.