Gen. Naravane’s comments come in the backdrop of allegations by Opposition parties that the armed forces are being politicised. 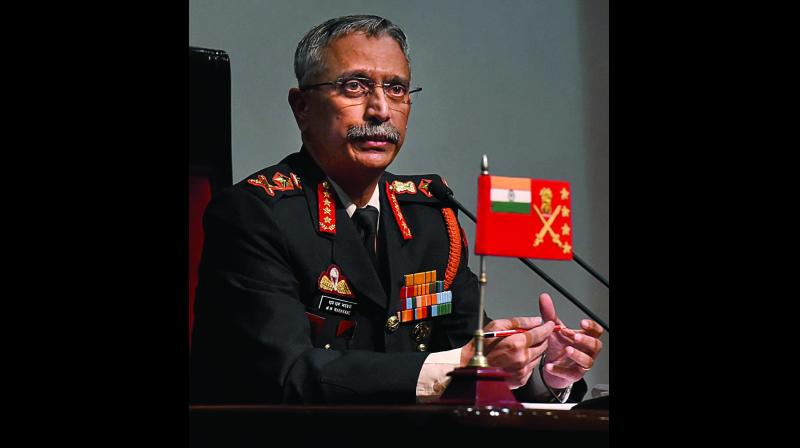 New Delhi: Bringing back the focus to the apolitical nature of the Indian Army, the new Army Chief, Gen. Manoj Mukund Naravane, said on Saturday that the Army and the armed forces owe their allegiance to the Constitution of India and its core values of “justice, liberty, equality and fraternity,” as enshrined in the Preamble, should guide the forces in all their actions at all times.

“As the Army, we swear allegiance to the Constitution of India... Justice, liberty, equality and fraternity enshrined in the Constitution should guide us,” he said in his opening remarks at his first press conference as Army Chief.

Gen. Naravane’s unequivocal message on the Army being apolitical follows his predecessor General Bipin Rawat’s criticism of those leading the protests against the citizenship law some weeks ago.

Gen. Naravane said that the “ABC” of the Indian Army was “allegiance, belief and consolidation,” adding, “We swear allegiance to the Constitution of India. Be it officers or jawans, we have taken oath to protect the Constitution and that is what should guide us in all time and all our actions”.

“What it translates into is also the core values which are enshrined in the Preamble to the Constitution — that is, justice, liberty, equality and fraternity and that is what we are fighting for (when) we are deployed in the border safeguarding the sovereignty and territorial integrity, it is to secure for our people these core values,” said the Army Chief.

This is what, the new Army Chief who took charge on December 31 said, needs to be kept in mind at all the times.

Gen. Naravane’s comments come in the backdrop of allegations by Opposition parties that the armed forces are being politicised. His predecessor and current Chief of Defence Staff (CDS) Bipin Rawat was criticised for commenting on political issues, including students’ protests against the Citizenship Amendment Act (CAA). “Leaders are not those who lead people in inappropriate directions, as we are witnessing in a large number of university and college students, the way they are leading masses of crowds to carry out arson and violence in our cities and towns. This is not leadership,” General Rawat had said last month.

Gen. Naravane said that the Army upholds the Constitution and what it stands for, including the fundamental rights guaranteed to all citizens. “We are an Army of the people and for the people,” he said.

On whether he would continue to speak strongly on issues, like his predecessor, Gen. Naravane said the Army is not seeking any publicity for doing what is “our duty.”

“We will continue in the same way, serving the country to the best of our ability,” he said.