Will take action if ordered to reclaim PoK: Army Chief

Gen Naravane said that the Indian Army is aware of the fact that there is threat from both China and Pakistan. 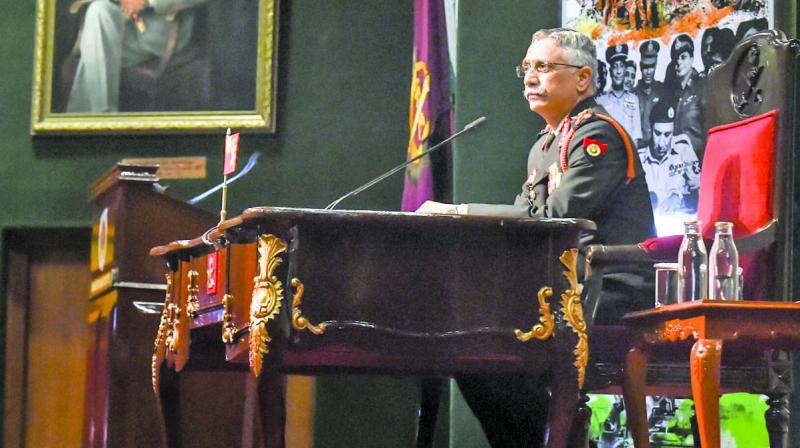 He said that the Army is “re-balancing” its deployment along the western and northern borders to deal with any kind of threat that might emerge from Pakistan or China.

Gen. Naravane said that Siachen is the closest point for “collusion” between China and Pakistan and therefore it is important to keep that area in our “possession”. The Army Chief said that counter-insurgency is the short term threat but “long term threat will always be conventional war and that is what we are preparing for”.

Gen. Naravane said that despite provocation by the Pakistan Army and its Border Action Team at Line of Control (LOC), the Indian Army will never resort to any “barbaric activity” and will uphold international norms. Pakistan’s Border Action Team is suspected to have decapitated a porter, who was among two civilians killed along the Line of Control (LoC) in Poonch district on Friday, and taken away the head.

“As far as Pakistan-occupied Kashmir is concerned, many years ago there was a parliamentary resolution on it that entire erstwhile Jammu and Kashmir is part of India. If Parliament wants that the area should also belong to us and if we get orders to that effect, then definitely we will take action on it,” the Army Chief said.

He said that the Army has to balance its deployment to cater to threat both from the west and the north.

“For dealing with the northern frontier we are going in for more capacity building, which include creating road to the forward areas, creating capacity in terms of habitat, storage for ammunition, moving some of our more advanced weapon system towards the eastern side,” said Gen. Naravane.

He said that with this the Army will be able to meet threat from any direction and it is prepared for the challenge.

Gen Naravane said that the Indian Army is aware of the fact that there is threat from both China and Pakistan.

“In case of simultaneous threat from both directions. There will always be a primary front and a secondary front. Wherever our primary front is, bulk of our forces and resources will be concentrated to deal with that threat. On the other front, we will adopt more deterrent posture so that we are not found wanting on either of them,” said the Army Chief. He said that this is why “we have a dual task formation and these formation are ready to move from west to east and east to west  to cater to the emergent threat.”