Prime Minister Narendra Modi said while people recall the oratory skills of Vajpayee, his silence had more power than his words. 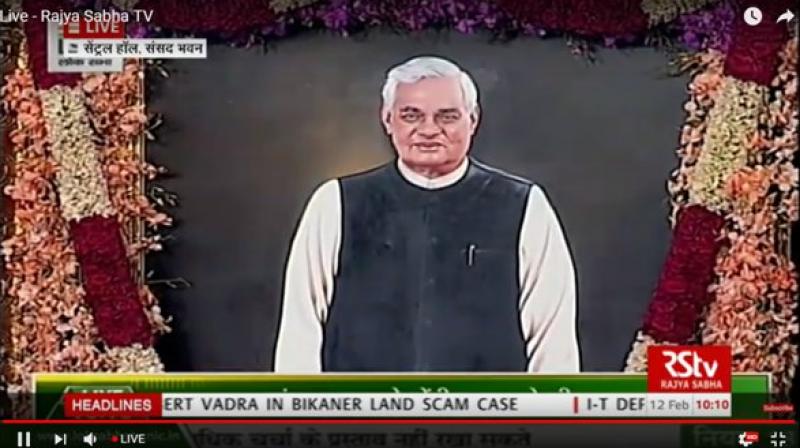 The President also said that the BJP veteran displayed exemplary patience and grit under the most difficult circumstances. Describing Vajpayee as a "school of public life", he said the former PM worked hard to speed up connectivity by pushing for highways, reforms in the IT and telecom sectors. The President also felicitated Krishna Kanhai, the artist who made the portrait of Vajpayee.

The portrait shows a smiling Vajpayee in his trademark 'dhoti-kurta' and sleeveless black jacket. Prime Minister Narendra Modi said while people recall the oratory skills of Vajpayee, his silence had more power than his words. He recalled the famous pauses Vajpayee used to take in his speeches.

"His silence had a message," Modi said in his address.

He said despite the ups and downs in his political life, the BJP veteran never compromised on his principles. The PM said for Vajpayee, there were no enemies in politics.

"There is opposition. There are no enemies in democracy. The new generation and we all have to learn," he said.

He said Vajpayee's principle that there could be rivalry but no enmity in politics needs to be followed today when the "political discourse is going down".

Leader of the Opposition in Rajya Sabha Ghulam Nabi Azad recalled Vajpayee's words that if India is not secular, it is not India.

He said Vajpayee was unrelenting in his attack on the government but never downplayed its achievements too. Vajpayee, Azad said, never had bitter words for political rivals. National icons such as Mahatma Gandhi, Jawaharlal Nehru, Netaji Subhas Chandra Bose, Rabindranath Tagore, BR Ambedkar, Dadabhai Naoroji, Indira Gandhi, and Shyama Prasad Mookerjee have been immortalised by their portraits in the central hall.

Besides holding a joint sitting of two Houses, the central hall is generally used for many prestigious events. Top world leaders including then US President Barack Obama have delivered speeches here.

On a daily basis, MPs gather here during breaks in sessions. The last addition to the galaxy of portraits at the central hall was in 2003, when Vinayak Damodar Savarkars portrait was added. Eminent painters such as S Roerich, NS Subhakrishna, Bikash Bhattacharjee and Chintamani Kar have made some of the portraits.

Vajpayee, who passed away in August 2018 after a prolonged illness, was thrice prime minister and the first to lead a coalition government for a full term. Jawaharlal Nehru, Lal Bahadur Shastri, Indira Gandhi and Rajiv Gandhi are other former prime ministers whose portraits adorn the walls of the Central Hall.