India   All India  12 Feb 2020  Of a photography contest that looked to draw attention to young talent in Delhi
India, All India

The display includes photos taken by four winners from India. 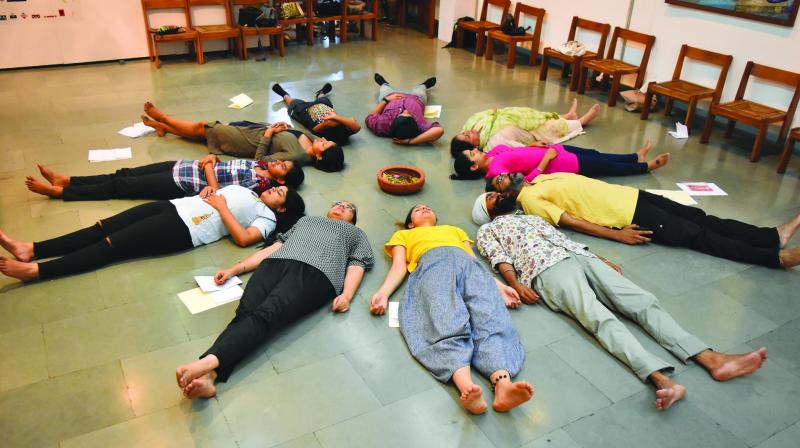 The photographic series The Wretched and the Earth taken by Italian Grand Prix winner Gabriele Cecconi was a truly tragic and epic image about the forced confrontation between man and nature.

One of the most abiding images that I have of working in the newsroom for three decades is the selection of photographs that I made day in and day out for each page to render the page visually appealing and say all when mere words wouldn’t suffice. This daily curation or selection became second nature and even now I am most comfortable and quick working on shows that have photographic content or elements.

Given my own background, it was with great enthusiasm that I went to see the photographs of the winners of the Andrei Stenin International Photo Contest curated by Aakshat Sinha and organised by Sputnik News of the Rossiya Segodnya Media Group under the patronage of the Commission of the Russian Federation for Unesco. The Andrei Stenin International Press Photo Contest is aimed at supporting young photographers and drawing public attention to the tasks of modern photojournalism.

The contest is an avenue for young photographers who are talented, sensitive and open to new experiences as they draw our attention to people and events close to us. This year’s entries have just opened and photographers can apply till the end of this month. And one would be happy to see greater participation from India.

The exhibition comprised photographs by some of the world’s best young photographers from Russia, India, South Africa, Italy, the US, France and other countries. K.S. Dhatwalia, principal director-general, Press Information Bureau and the ambassador of Russia to India, Nikolay Rishatovich Kudashev, presided over the inaugural event.

The display in New Delhi represented a range of vivid images. The photographic series The Wretched and the Earth taken by Italian Grand Prix winner Gabriele Cecconi was a truly tragic and epic image about the forced confrontation between man and nature. It focuses on the Rohingya refugees and the southern regions of Bangladesh put on the brink of slow destruction by their migration.

The heroines captured by Francis Rousseau (France) for his The Women of Arugam Bay are women from Sri Lanka who decided to learn how to windsurf. One of the most staggering photos that took the first prize in the My Planet category is by Justin Sullivan of South Africa. It depicts an African elephant that was killed by ivory-hunting poachers in Northern Botswana.

The display includes photos taken by four winners from India. Kolkata-based journalist and freelance documentary photographer Debarchan Chatterjee earned an Honourable Mention from the competition jury in the Top News category for his photo focusing on a protest movement. Amit Moulick and Ayanava Sil contributed bright and dynamic pictures to the Sports category. Santanu Dey showed some filigree technique in the Nostalgia on the Verge of Extinction series to convey features of professions that have become or are becoming extinct in Kolkata — from Bahurupi actors to street glass cutters.

The curator of the competition Oksana Oleinik noted: “India is one of the top five countries by the number of submissions for the contest, and I hope that professionals’ interest in our project will grow.” The images were being shown in New Delhi for the second time in the history of the Andrei Stenin competition.

As per tradition, December 22, the birthday of Rossiya Segodnya photojournalist Andrei Stenin, is the day the contest, named after him, started accepting submissions. The contest, established by the media group in memory of their colleague in 2014, aims to promote and support young photojournalists aged between 18 and 33. Submissions will be accepted until February 29, 2020. Photo series and single photos can be submitted through the stenincontest.ru website. The 2020 competition includes four categories Top News, Sport, My Planet and Portrait: A Hero of Our Time. One single entry and one photo series can be submitted in each of the four categories.

Actually, I am rather pleased to follow what Aakshat is doing for the last eight months for it is a perfect indication of how his mind and heart functions and how he approaches the arts. I like the fact that he perceives the arts as a composite whole. Just a few weeks ago, he had organised an art exhibition of specially-abled children of Deepashram, a home for boys. These are children who go missing, are orphans or have been abandoned by their family, mostly because they could not cope (financially or psychologically) with the challenges that these children faced (physically or intellectually). Deepashram currently houses 53 children (21 below 18 years and 32 above).

Out of these, 12 special children are gifted artistically and artiste Shikha Agarwal has been facilitating art workshops for them. “My dreams, my world” is an art exhibition of works by these specially-abled children. The children have been using mediums like pastels, crayons, sketch pens, pencils, water colours and even been doing collages. Ajay, Ashok, Govind, Gulam, Javed, Johny, Kapil, Pradeep, Roshan, Shibu, Suresh and Vicky were the young artistes whose works were exhibited and also released a book that captured some of their story and art.

It was really nice that Aakshat gave credit to the late artiste Umesh Varma, who loved children, as the inspiration behind the initiative. Organised by his son, Namit Varma, the Arpana Fine Arts Gallery came forward to give the gallery gratis.

Another major multimedia 24-day-long festival that Aakshat curated a few months ago was “I am — Identity Art Marathon”. The festival with four exhibitions (painting — figurative and abstract, photography and drawings) and a multitude of events — talks, walks, live sessions and workshops, was an attempt to populate an art gallery with multi-disciplinary art forms from visual to performing and help the audience actually engage and evolve. His idea was to make art accessible to all and unravel the beauty of the art within each one of us, both as practitioners and as audience.

Talking about the festival, Aakshat recounts: “I Am” is possibly the shortest sentence that is complete. The realisation that I am; that I finally believe my existence; that I acknowledge and accept all of who I am, in the present, on the basis of the past can be liberating. I believe that the “identity” of an individual is simply the sum total of his experiences. As we go along existing, living our lives, we accumulate small and large experiences that define who we are.

The idea of the “I Am — Identity Art Marathon” was to help us experience many rather than just any one specific form of art. Art has the power to infect us with ideas, force us to act, and generally help us expand the canvas of our perception.

Alka Raghuvanshi is an art writer, curator and artist and can be contacted on alkaraghuvanshi@yahoo.com