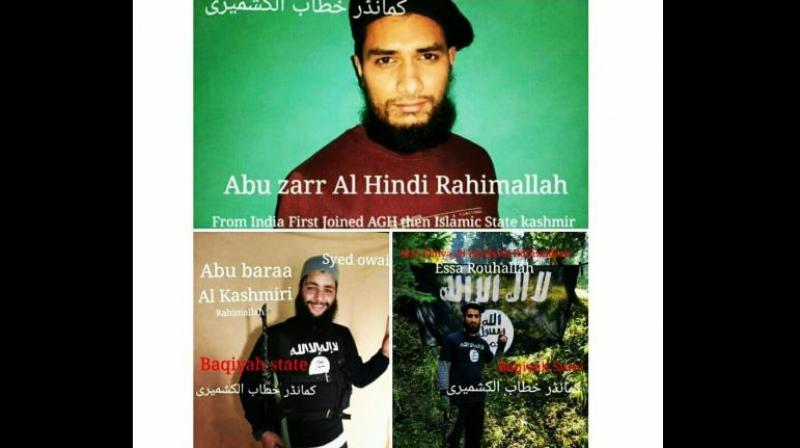 Three militants belonging to Hizb-ul-Mujahideen outfit were killed in a firefight with the security forces in southern Anantnag district overnight. (Photo: Facebook)

Srinagar: The authorities shut schools and colleges in Srinagar district whereas security forces in riot gear were quickly fanned out to enforce security lockdown in Jammu and Kashmir’s summer capital amid rising tensions following the killing of three militants allegedly owning allegiance to the Islamic State (ISIS) in an overnight encounter.

While schools and colleges were shut in Srinagar district, the class work at Kashmir University and other similar institutions was suspended and all board and university level examination scheduled for Monday deferred too.

The Cellular companies snapped high-speed mobile Internet service in Srinagar city following an order to this effect was issued by the district administration.

“The mobile internet speed was reduced to 2G as soon as we got the order to do so,” said an official. Security restrictions were being imposed also on parts of Anantnag including Kokernag, a report said.

An official spokesman said that these steps were taken to prevent “breach of law and order” in the summer capital and elsewhere.

Initial reports had said that three militants belonging to Hizb-ul-Mujahedin outfit were killed in a firefight with the security forces in southern Anantnag district overnight.

However, a file photograph of one of the slain militants Eisa Fazili which has gone viral on Facebook since shows him wearing T-shirt with the ISIS's emblem and standing near a banner of the outfit which is also known by its Arabic language acronym Daesh. The ISIS has named slain men as Abu Zarr Al-Hindi, Abu Barra Al-Kashmiri and Eisa Ruhollah Khatab Al-Kashmiri.

The police said that while “Pursuing credible leads” about the presence of militants, the security forces mounted a search operation in Anantnag’s Hakoora area late on Sunday night.

“As the search was going on, the militants hiding in the area fired upon the search party. The security forces retaliated to it and in the ensuing encounter three militants were killed,” said a police spokesman.

He identified two slain militants as Eisa Fazili of Srinagar and Syed Owais of Kokernag (Anantnag) and said that the identity of their third accomplice is being ascertained. The spokesman also said that AK-47 rifles, pistols and hand-grenades were found on the slain militants and that “no collateral damage has taken place”.

Eisa’s father Naeem Fazili, a college principal, wrote on his Facebook timeline “As per reliable sources, my son Eisa Fazili has left for heavenly abode. Inna lillahi wa inna ilayhi raji'un (We belong to Allah and to Him we shall return).”

The family sources said that Eisa, a BTech student at Baba Ghulam Shah Badshah University, Rajouri (J&K) had disappeared from his Srinagar residence a couple of months ago. Later it was known that he has joined the militants’ ranks. “His father had through social media issued appeals to his son to return home but in vain”, said the sources.

The police said that one of the slain militants was involved in a recent attack at a police guard post in Soura area of Srinagar leaving one cop dead.

The ISIS had claimed responsibility for carrying out the attack and said that the war has just begun.

A day after the February 26 attack, the ISIS had on its media website ‘Al Amaq’ said, “Assassinated an element of police in firing near city of Srinagar in Kashmir yesterday…A war has just begun.”

The group had also placed the photograph of the service weapon of Farooq Ahmed Yatoo, the policeman killed while guarding the residence of separatist Hurriyat Conference leader Fazl ul Haq’s Qureshi at Soura, on its website.

Reacting to the claim, the State’s Director General of Police, Shesh Paul Vaid, had said that it was still a matter of investigation and that nothing with certainty could be said about the presence of the terror organization in Kashmir.

Asked how seriously the issue was, the police chief told this newspaper, “They have claimed it...they had made a similar claim in November (2017) when Mughees, a terrorist from Srinagar, was killed and our sub-inspector was martyred. But we don’t see any consequent change on the ground. Yet it needs verification.”

In November last year, the ISIS had through 'Al Amaq' claimed the responsibility for the shootout in which police Sub-Inspector Imran Tak was also killed in Srinagar’s Gulab Bagh area. On that day, a police party was fired upon by three men travelling in a car. The police returned fire killing one militant Mughees Ahmed Mir.

However, the DGP Vaid had while reacting to the claim said that there was no ISIS presence in Kashmir. He had told this newspaper, “I don’t think the IS has any footprints here.”

The Islamic State of Iraq and Syria (ISIS) also known as Islamic State (IS) and by its Arabic language acronym Daesh gained global prominence in early 2014 when it drove Iraqi government forces out of key cities in its Western Iraq offensive. It has since been designated a terrorist organisation by the United National and by many member countries individually.

The flags of the IS and al-Qaeda had first appeared in Kashmir during protests and stone-pelting incidents in Srinagar, precisely outside the City’s historic Grand Mosque, in 2014.

Masked youth held these flags before the glare of cameras and were quickly surrounded by locals, mainly youth, apparently to ensure no harm comes to them. During one such display, the security personnel swung into action and chased them into nearby dark alleys but no serious attempt was made to capture the masked youth carrying the IS flag.

The then Chief Minister, Omar Abdullah, had shrugged these incidents off saying it was being done by some “stupid” youth and that IS or al-Qaeda as such has no presence in Jammu and Kashmir.

Though waving of green Islamic and Pakistan’s national flag is somewhat inseparable part of the street protests in Kashmir, these being replaced by IS flags at places continued for some time despite repeated pleas from even Syed Ali Shah Geelani, the widely-admired octogenarian separatist leader, that the pastime may only blemish what he insists is ‘our own just and indigenous struggle for freedom’.

An inquiry launched by local police had revealed that a local “small-time” cleric was involved in encouraging the IS flag waving at the protests particularly outside the Grand Mosque. A reporter with a TV news channel was also under scanner for his role in the pastime. “We’ve reports that he actually knows beforehand where such flags will go up,” a police officer had told this newspaper. However, the activity did not last long.

The police has taken pro-independence Jammu Kashmir Liberation Front chairman Muhammad Yasin Malik in preventive custody and lodged him in Srinagar's Kothi Bagh police station where as some other separatist leaders including Mirwaiz Umar Farooq have been placed under house arrest "as a precautionary measure".

Meanwhile, hundreds of people gathered outside the house of slain Eisa Fazili in Srinagar’s Ahmed Nagar locality to receive his body.

A report from Anantnag said that clashes between irate crowds of youth and the security forces erupted in Kokernag, the home village of other local militant Syed Owais. About the third slain militant, it has been claimed in social media that he is  Abu Zarr al-Hindu (from India).