Can give up MP house, live in jungle: Sharad Yadav

I’ll continue to fight to save Constitution, says the septuagenarian MP. 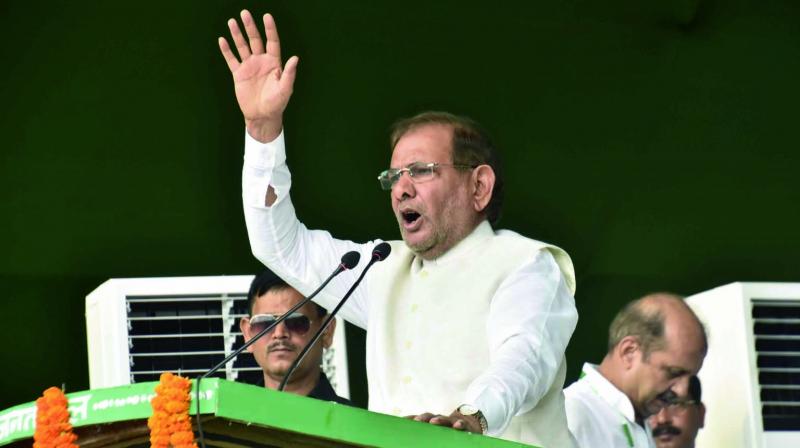 New Delhi: Veteran politician and “rebel” JD(U) leader Sharad Yadav claims he is at his best when facing an adversity. The latest challenge before him is to retain his Rajya Sabha membership and he is leaving no stone unturned to fight against his “illegal disqualification”.

“I am fighting for my right,” said an aggressive-looking 70-year-old MP.

The engineer-turned-politician, who has taken oath as an MP 11 times in his parliamentary journey which began in 1974, has challenged Rajya Sabha Chairman M. Venkaiah Naidu’s decision to disqualify him in the Delhi high court.

“Such illegal actions are a threat to democracy. I will continue to fight for the protection of the Constitution,” said Mr Yadav.

Apart for the battle to retain his place in the Rajya Sabha, Mr Yadav’s ordeal also involves holding on to his official MP bungalow at 7, Tughlak Road and getting monthly salary.

Lawyers representing Rajya Sabha Chairman have sought his eviction from the bungalow and discontinuation of his salary, claiming that he stands “disqualified”, however, the Delhi high court has offered relief to Mr Yadav and said he may enjoy both the benefits till his petition is decided.

“For me the bungalow is not more important than my struggle. Even if I need to go to jungle, I don’t care,” said Mr Yadav on being asked about the scenario of losing the legal battle.

Mr Yadav’s lawyer Devdutt Kamat said Mr Yadav’s plea in the high court revolves around the premise that he was never given an opportunity to be heard. “We are challenging the disqualification order’s inference that Mr Yadav voluntarily surrendered his membership of the JD(U),” he said.

Mr Yadav blames the Narendra Modi government for his troubles and vows to see its end.

“This government just gives speeches without any outcome. The government and the ruling BJP are nothing but a rumour mongering society,” he said, accusing it of failing to deliver its poll promises of creation of two crore jobs annually, fighting corruption and increasing farmers’ income by one-and-a-half times.

The Modi government is using diversionary tactics to deflect attention from the real issues. It never got the mandate for holding joint polls of Lok Sabha and Assemblies but for development. It got the mandate for “Sabka Saath, Sabka Vikas” and to bring `15 lakh in bank account of each Indian, said Mr Yadav.

To cover up its failure, the ruling party and the government have been raising issues like joint polls, gau raksha, love jihad and ghar wapsi of converted dalits to the Hindu religion, said the battle-weary warhorse.