Nothing but temple can be built in Ayodhya: RSS

The RSS leader however, said if Sri Sri succeeds in his task, the Sangh would welcome it. 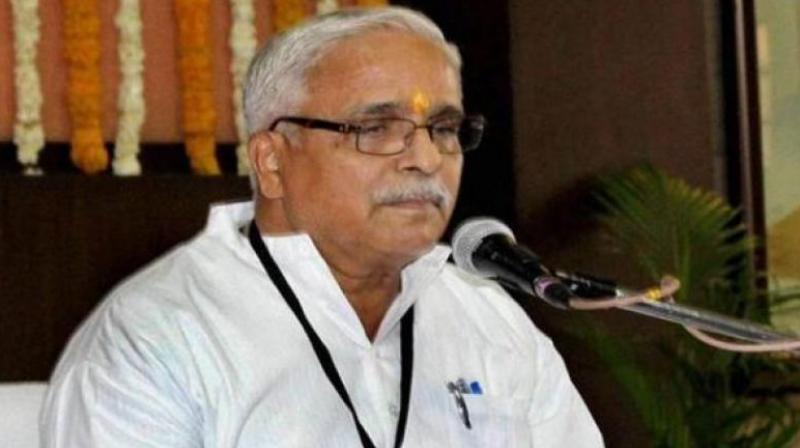 RSS general secretary Bhaiyya Joshi also said that years of experience suggests that it would not be easy to arrive at a consensus. (Photo: PTI)

New Delhi: Asserting that the Ram Mandir will be constructed at the “same (disputed) place” in Ayodhya, the RSS on Sunday clarified that nothing else can be build at the place. The RSS also feels that it is currently at a “santoshjanak sthiti (satisfactory place)” and claimed that its acceptance is growing among the people, who are getting connected with it in a large number.

As the RSS’s Akhil Bhartiya Pratinidhi Sabha concluded its three day long meet in Nagpur, the Sangh Parivar fountainhead “welcomed” the efforts of spiritual leader Sri Sri Ravishankar’s initiative for building a consensus between the parties involved in the legal battle on the ownership right of the disputed land. However, RSS general secretary Bhaiyya Joshi also said that years of experience suggests that it would not be easy to arrive at a consensus.

“It is certain that only the Ram Mandir and nothing else will be constructed at that site...but there is a (legal) process that one has to go through...we believe that after the (Supreme) court’s verdict, the construction of the Rammandir would be started..we are waiting for the decision over the ownership right of the (disputed) site,” said Mr Joshi to a question on the issue by the media.

On another question on Sri Sri’s initiative, Mr Joshi said that the RSS wants a consensus on the issue but it is not an easy task because of the number of groups involved in the case. The RSS leader however, said if Sri Sri succeeds in his task, the Sangh would welcome it.

When asked about Sangh Parivar affiliates often criticising the Modi government over their respective issues, Mr Joshi said affiliates should continue taking up the matter strongly, which they think are not dealt properly by the government.