“The final figure on polling percentage in the booth may go up”, sources in district election office (DEO) in Dantewada said. 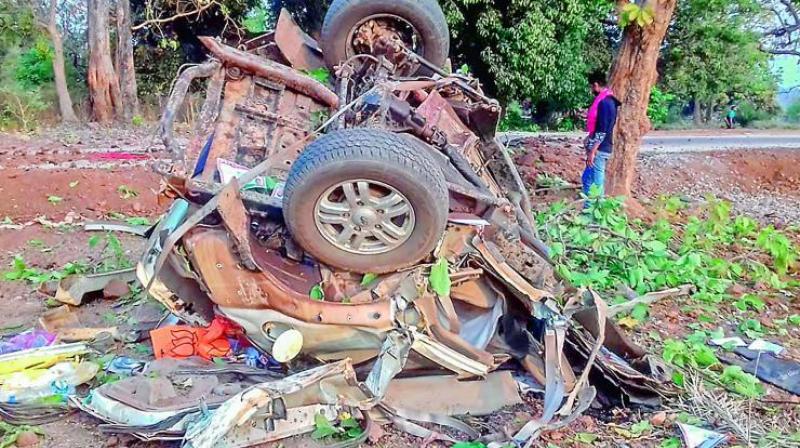 The MLA's mobile phone is missing and it might have been taken by Naxals, the official said. (Image: AP)

Raipur: The polling booth in Shyamgiri under Kuakonda block in Chhattisgarh’s south Bastar district of Dantewada where local BJP MLA Bheema Mandavi was killed along with four jawans in a Maoist Improvised Explosive Device (IED) blast on April nine, on Thursday witnessed a record polling of around 78 percent.

The polling booth is a part of Bastar (ST) Lok Sabha constituency which went to polls in the first phase of parliamentary elections in Chhattisgarh on Thursday.

“The final figure on polling percentage in the booth may go up”, sources in district election office (DEO) in Dantewada said.

Tribal voters in the village of Shyamgiri were seen standing in queue at the polling booth since morning to exercise their franchise. They poured into the polling Centre in full strength defying the Maoists’ call to boycott poll. The convoy of the BJP MLA was attacked by Maoists at a place barely one km from Shyamgiri where he had gone to attend a tribal fair on the fateful day.

His bullet-proof SUV was blown up in an IED blast by Maoists while he was on way from Shyamgiri to Nakulnar, leading to his death along with four jawans accompanying him.

In show of grit and defiance, grief-stricken family members of the slain BJP MLA on Thursday reached the polling booth in their village of Gadapal in Dantewada district to exercise their franchise.

The deceased MLA’s widow Ojoswi Mandavi and his father Linga Mandavi were seen standing in a long queue of voters in the booth to cast vote. They were accompanied by the slain MLA’s four minor children. There were 1100 voters in the village.

In Errabore village under south Bastar district of Sukma, tribals were seen standing in long queue since morning to cast their votes.

Errabore had hogged limelight when Maoists stormed a relief camp opened for members of now banned Salwa Judum, an anti-Naxal civil vigilante force, in the night of July 18, 2006 killing 31 inmates including an infant and a six-year-old girl, and injuring 70 others.