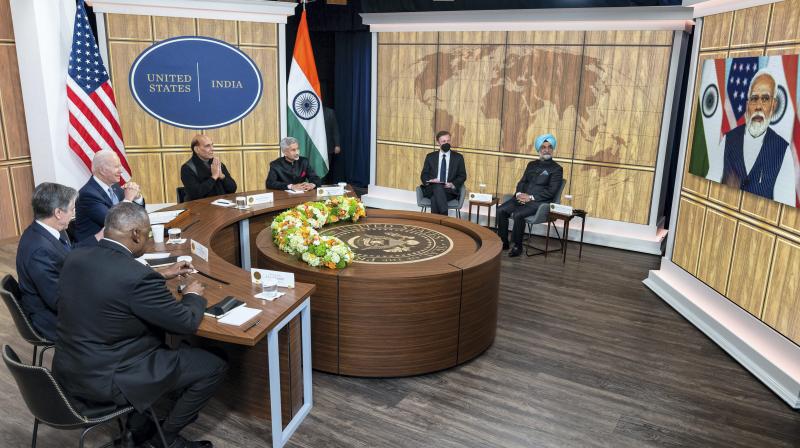 New Delhi: Announcing that the top leaders of the four-nation Quad will meet in-person on May 24 in Japan, US President Joe Biden began his virtual summit with Prime Minister Narendra Modi late Monday evening (IST) by condemning the “horrific assault on Ukraine” by Russia and said both India and the United States would consult on how to “stabilise the effects of the Russian war”. The two leaders discussed the situation in Ukraine in detail later in the talks, apart from the cooperation in the Indo-Pacific region and efforts to combat both the Covid-19 pandemic and climate change.

The US President referred to the “major defence partnership” between the two countries, that is significant given China’s increasing military assertiveness in the region. In his inaugural remarks that followed, Prime Minister Narendra Modi described the situation in Ukraine as “worrying”, adding that New Delhi had condemned the recent killings of civilians in Ukraine’s Bucha and had demanded an independent probe.

Pointing out that India had supplied humanitarian assistance to Ukraine including medicines, Mr Modi said that at Ukraine’s request, India was sending one more consignment of medicines. The PM also said he had personally requested Russian President Vladimir Putin to hold direct discussions with his Ukrainian counterpart, adding that the Indian Parliament had discussed the situation in Ukraine and that New Delhi hopes there can be peace following talks between Russia and Ukraine.

Mr Modi also thanked the US President for taking the initiative to host the virtual meeting, adding it was important to “give a direction to the 2+2” talks in Washington at the foreign and defence ministerial level that will follow the virtual meeting. External affairs minister S. Jaishankar also met US secretary of state Antony Blinken in a separate bilateral meeting on Monday evening in Washington.

It should be noted that the US is stepping up pressure on India to take a tougher line on Russia, particularly after the Russian military offensive in Ukraine that has been followed by crippling economic sanctions by the West on Russia. The US President himself recently had described India’s response as “shaky”, and it is well known Washington is not too pleased with New Delhi which has so far not condemned Moscow for the invasion. While India enjoys time-tested ties with Russia, the US is also unhappy at India recently buying Russian oil at heavily discounted rates.

In a statement after the virtual meeting between the two leaders, New Delhi said: “Prime Minister Narendra Modi and President Joseph R. Biden held a virtual meeting today. Raksha Mantri Shri Rajnath Singh and Minister of External Affairs Dr S. Jaishankar, who are in Washington DC for the India-US 2+2 Ministerial Dialogue, were also present at the White House during the interaction, along with their US counterparts, secretary of defence Lloyd Austin and secretary of state Antony Blinken. The two leaders had an extensive exchange of views on several regional and global issues, such as the Covid-19 pandemic, global economic recovery, climate action, recent developments in South Asia and the Indo-Pacific region, and the situation in Ukraine.”

New Delhi added: “They also took stock of the significant progress made in bilateral relations in recent years. Both leaders agreed that further strengthening of the India-US Comprehensive Global Strategic Partnership would be of tremendous benefit to the two countries, and would also contribute to global peace, prosperity and stability.”

In his remarks, Mr Modi also said: “As the world's two largest and oldest democracies, we are natural partners. And the progress we have made in our relationship over the years, which has created a new momentum, even a decade ago today, was perhaps hard to imagine.”

On Ukraine, he added: “Our talks today are taking place at a time when the situation in Ukraine remains very worrying. Till a few weeks ago, more than 20,000 Indians were stranded in Ukraine. And most of these were young students. After a lot of hard work, we were able to get them out of there safely, although one student lost his life. Throughout this development, I spoke on the phone several times with the Presidents of both Ukraine and Russia. Not only did I appeal for peace, but I also suggested (to) President Putin to have direct talks with the President of Ukraine. The subject of Ukraine has been discussed in great detail in our Parliament as well. Recently the news of killings of innocent civilians in Bucha city was very worrying. We immediately condemned it and demanded a fair investigation. We hope that the ongoing dialogue between Russia and Ukraine will lead to peace.”