Here's what leaders from various political parties had to say. 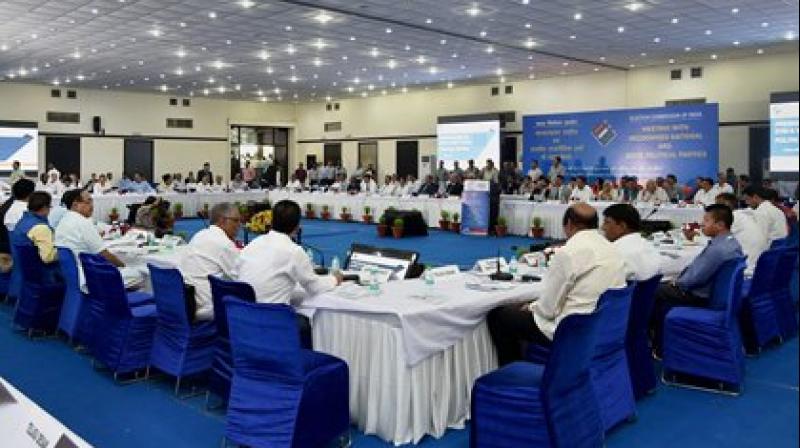 The all-party meeting convened by the Election Commission to discuss the reliability of the EVMs, an issue flagged by opposition parties got underway in New Delhi on Friday. (Photo: PTI)

New Delhi: The all-party meeting convened by the Election Commission of India (ECI) to discuss the reliability of EVMs - an issue flagged by opposition parties - today saw various reactions from different political parties.

The Aam Aadmi Party (AAP), which has been leading the opposition charge on this issue, claimed that its proposal of holding a 'hackathon' has been 'rejected' by the ECI.

Delhi Deputy Chief Minister Manish Sisodia, who was among the AAP representatives at the meeting, said that the EC 'refused to carry out a hackathon'.

"They said EVM tampering is not possible. They want proof of earlier elections. The EC should provide AAP with a machine that the party will try to hack. The EC should use VVPAT machine on all booths in all upcoming elections and make a rule for the counting of 25 per cent VVPAT slips in all Assembly," he added.

V. Maitreyan of the AIADMK's Panneerselvam camp said his group is convinced with the EVM security. "We support EVM. There is a need to restore the faith of people in EVMs. Now the VVPAT will also be used in 2019 general elections. The parties who will win will celebrate and the losers will always complain and crib," he added.

Dravida Munnetra Kazhagam (DMK) leader Tiruchi Siva said his party joined the EVM debate 'to find out the truth'. "EC held a detailed presentation on how EVMs cannot be tampered with. We are satisfied. The VVPAT will ensure greater transparency. It is a fool-proof system, we accept it," Siva said.

Vivek Tankha of the Congress Party said the electoral system should be trustworthy enough to satisfy the voters that their votes are going to the candidates of their choice.
"EC has announced that all future elections will be held by VVPAT. If people and parties are satisfied, your system will be accepted. If you don't satisfy them, you will have to go back to ballot. There must be transparency during voting and counting. Longer display of VVPAT chits to voter can increase transparency," Tankha told ANI.

From all India Trinamool Congress's perspective, Mukul Roy demanded reintroduction of paper ballot system. "EVM is not full leak-proof. Most advanced countries have gone back to their present systems. Today, we are strongly demanding for ballot papers to be introduced again and state funding is the only issue to resolve all these cases. We are not in favor of EVM that is what we are asking the introduction of ballot papers," Roy said.

Nationalist Congress Party (NCP) leader Vandana Chouhan told ANI that if the elections become transparent though VVPAT, then the party will agree with it. "There was a perception that EVMs can be tempered but nobody had proof. In Pune municipal elections votes counted were not matching the votes polled. How did it happen?" she added.

Communist Party of India (Marxist) general secretary Sitaram Yechury told ANI that as far as the EVMs are concerned, the allegations or irregularities with it should be settled for once and all. "As far as the EVMs are concerned, these allegations or irregularities should be settled once and for all. Every technical help must be involved to put an end to this matter. In case of dispute, Paper ballots should be considered," he added.

Bahujan Samaj Party (BSP) national general secretary Satish Chandra Mishra vouched for ballot papers. "BSP stand is that elections should be conducted through ballot papers. Today it has been proved that EVMs can be tempered. Fare elections could not be conducted through EVMs. EC has cleared that the upcoming elections will not conduct with old EVM machines. They gave us demonstration on new EVMs which gives a shows the slip for only 7 second. 7 seconds are not enough. Two slips should come out of the machine, one of them should be for the voter," he added.

Bharatiya Janata Party (BJP) leader Bhupendra Yadav said the AAP did not give any demonstration on a real EVM (in the Delhi Assembly).

The Election Commission today convened an all-party meeting over the issue of EVM and other electoral reforms. In its communication to the presidents of all the seven national and 48 state political parties, the Commission sent a status paper on EVMs and VVPAT.

The poll panel will try to assure parties that the EVMs cannot be hacked in any manner.
Last month, sixteen opposition parties had urged the Election Commission to revert to the paper ballot system saying that the alleged tampering has created trust deficit in the credibility of the EVMs.

However, the poll body has been maintaining that EVMs are tamper proof and cannot be manipulated.

The poll panel intends to use VVPAT units attached with EVMs in the coming elections for greater transparency and to keep voters' confidence in the electoral process. The Union Cabinet had given its nod to sanctioned funds of nearly 3200 crore rupees to procure more than 16 lakh VVPATs as sought by the EC.

On Tuesday, the AAP, during a special session of the Delhi assembly, conducted a live demonstration on how EVMs can be tampered with.

Reacting to the demonstration, the poll panel said the machine used to conduct live demonstration was a 'look-alike'' which was made to function in a 'tampered' manner.
Conducting a mock poll on an EVM machine, AAP leader Saurabh Bharadwaj demonstrated how despite giving two votes each to various parties; the final count showed that votes of some parties had been transferred to one party.

A day before the all-party meeting, the AAP on Thursday forwarded a new demand, calling for an all party committee to be formed under the monitoring of the EC to ascertain whether EVMS were hacked in the recently held elections or not.