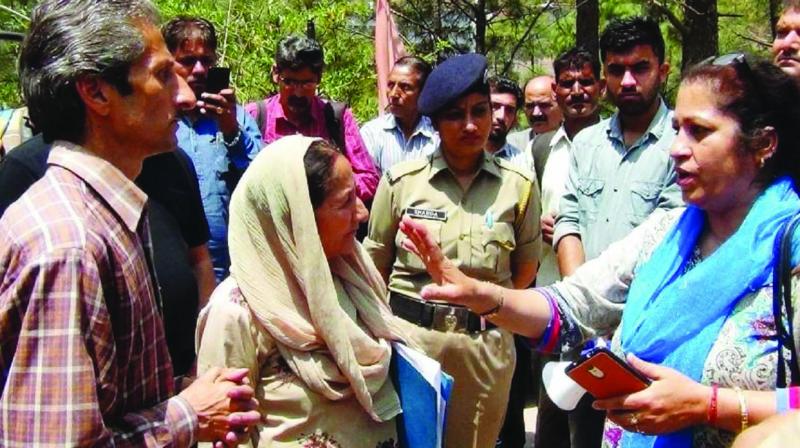 Assistant town and country planner Shail Bala (right) who was shot dead on May 1 by hotelier Vijay Singh when she was overseeing a demolition drive in Kasauli in Himachal Pradesh.

Shimla: The recent killing of a lady officer Shail Bala, who went to execute a Supreme Court order on demolition of illegal structures at Kasuali, Himachal Pradesh, is not a freak incident, but a manifestation of deeper malaise.

The incident has exposed a nexus between the builder mafia, officers and politicians. Almost all the towns in the hill state have witnessed an unplanned growth, thanks to the retention policies of successive governments. Under these policies, all the illegal constructions are legalised after a while, encouraging people to raise more buildings in the ecologically fragile region.

The killing of Shail Bala is a result of decades of neglect by the successive governments in the state that allowed people to go in for construction over and above the permissible limit. The politicians are always ready to put pressure on various administrative departments not to “trouble” the violator of laws. The successive governments have supported the “retention policy”, under which violators get the illegal buildings regularised after paying a small compounding fee. The Himachal Pradesh high court recently stepped in to prevent such a move.

Repeated retention policies introduced by the Himachal Pradesh government have encouraged unauthorised constructions in the hills, which pose a serious threat to life and property in case of an earthquake.

Activists and concerned citizens who have been raising their voice against the plundering of the hills feel vulnerable. “I have been threatened on many occasions. At one point there were people who went right up to my house, threatened me and my mother. If a lady officer who is on duty and with the police can be killed, what safety an ordinary person has,” said Himanshu, an activist from Shimla area.

The Comptroller and Auditor General had recently made an observation in his report on Social, General and Economic Sectors. Portraying a grim picture of earthquake preparedness in the state, the CAG had stated that an increasing trend in the number of encroachments or unauthorised constructions has been witnessed in each new retention policy.

The Himachal Pradesh government introduced the first retention policy in 1997. This policy was introduced to regularise the buildings with additional storeys or construction in excess of building plan approved by the civic agencies or on undersized plots that are not allowed to raise high buildings.

Talking on the issue, principal accountant general (Audit), Himachal Pradesh, Ram Mohan Johri, said that the state government had introduced the first retention policy on regularising the construction in notified planning areas of various civic bodies, including Shimla, in 1997. The state received as many 747 applications for regularisation of unauthorised constructions.

Several citizens have rightly pointed out that errant hotels, guest houses and even commercial or residential buildings do not spring up overnight.  It is visible to everyone, but the authorities simply overlook the violations.

Another major area of concern is the violation of Section 118 of Himachal Pradesh Tenancy and Land Reforms Act, 1972, which restricts transfer of land in the name of any person who is not an agriculturist of the state.

The law was brought in by first chief minister Y.S. Parmar to protect the peasantry of the state as the land in hills is scarce.

However, the Act has now been diluted as a number of illegal buildings have come up under the garb of special permission under Section 118. The previous Congress government allowed religious bodies to buy land in Himachal.