India   All India  12 May 2019  Bhubaneswar Rajdhani catches fire, no casualties
India, All India

The power car was disconnected from the rest of the train and the overhead electric wires were switched off for safety reasons. 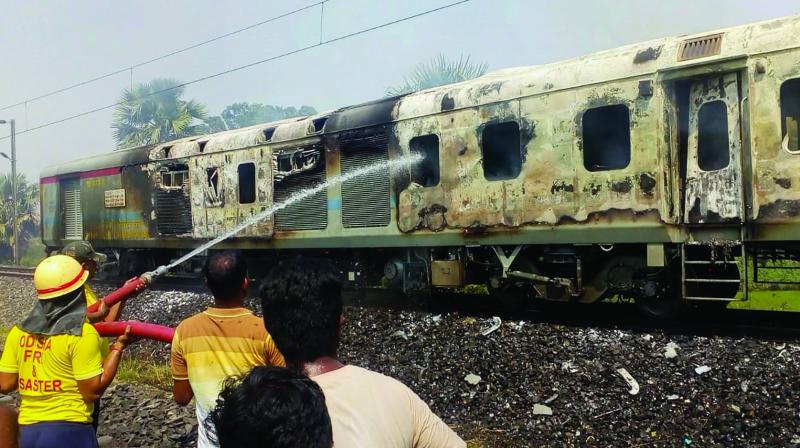 Firefighters attempt to douse a fire that broke out at the generator car of New Delhi-Bhubaneswar Rajdhani Express in Odisha’s Balasore district on Saturday. (Photo: PTI)

Balasore: A major accident was averted on Saturday  when the New Delhi-Bhubanewar Rajdhani Express caught fire near Khantapada station in Balasore district.

According to reports, the generator car of the train caught fire following which the alert railway staff detached the car from the train.

All the passengers of the Rajdhani Express are safe and three fire tenders are presently on the spot to douse the flames, informed Balasore station manager. As soon as smoke entered B-1 bogie, passengers were shifted to other coaches.

The fire broke out between 12.50 pm to 1 pm and severely damaged the power car in the rear of the train, but did not spread to any other coach, an official said.

The incident occurred at Khantapada in Kharagpur division of South Eastern Railways, said an official of the East Coast Railway, adding that three fire tenders reached the spot and doused the blaze.

The power car was disconnected from the rest of the train and the overhead electric wires were switched off for safety reasons.