Jaya’s nephew, niece fight it out for Poes Garden

She also charged that Jayalalitha had been killed by her long-time aide V.K. Sasikala and that her brother, Deepak, had joined her for “money”. 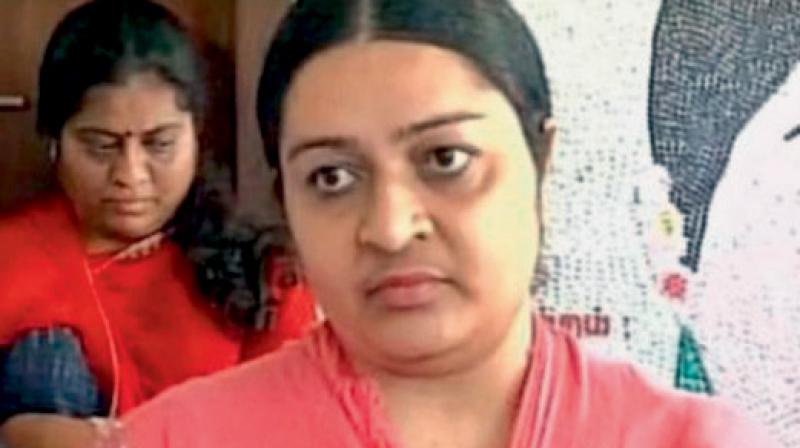 Chennai: The battle for the palatial Veda Nilayam bungalow in upscale Poes Garden, once the most powerful address in Tamil Nadu where J. Jayalalithaa lived for more than four decades, began on Sunday and turned ugly almost immediately.

The late chief minister’s legal heirs — niece Deepa and nephew Deepak — were involved in a verbal duel inside and outside the Poes Garden residence, with the media in full attendance.

High drama prevailed at the Poes Garden bungalow as Deepa, the daughter of late Jayalalithaa’s brother Jayakumar, arrived at around 11 am, “on invitation” of her brother Deepak to garland the portrait of her late aunt. Interestingly, Deepa’s husband Madhavan, who had fallen out with her a few months ago, accompanied her.

But after she paid her respects, a scuffle broke out between the two with Deepa later alleging that “but for the media presence, she would not have returned alive.” As she emerged from the residence, she dramatically accused the Mannargudi clan (Sasikala’s family) of trying to “harm” her and chief minister Edappadi K. Palanisami of “doing nothing” to protect her.

She also charged that Jayalalitha had been killed by her long-time aide V.K. Sasikala and that her brother, Deepak, had joined her for “money”.

Though Deepa claims her visit to the bungalow was “sudden”, sources said it was planned as some media organisations had received phone calls from her aides saying that they were going to “claim” the property.

“A conspiracy has been hatched to harm me and I think that is why my brother (Deepak) telephoned me at 4.30 am on Sunday and requested me to come to Poes Garden. Only after I went there did I realise it was a drama... I have begun legal formalities to claim my stake in the Poes Garden residence,” Deepa told reporters at her T. Nagar residence in the evening.

It appears that a scuffle broke between the siblings when Deepa wanted to go inside the sprawling premises and Deepak objected. Videos that surfaced after the incident indicate that they exchanged barbs and Deepa openly accused her younger sibling of “siding with Sasikala’s family just for the sake of money.” “He (Deepak) was not in a proper state of mind... He is colluding with (V.K.) Sasikala and (T.T.V) Dhinakaran to attack me and harm me. The incident that took place today suggests there is a larger conspiracy to kill me,” Deepa, who was not allowed to meet her aunt when she was battling for her life at Apollo Hospitals here last year, said. Pointing at the “mysterious circumstances” under which Jayalalithaa was moved to Apollo Hospitals and her subsequent death after 75 days, Deepa alleged that Jayalalithaa was “killed” by Sasikala and her brother, Deepak. “My brother seems to have joined them (Sasikala family) for money. They killed her,” she said.

While Deepak admitted that he had invited his sister Deepa to the Poes Garden bungalow, he rejected outright her allegations that she was “mistreated and not allowed inside.”

“No one can deny entry to her. We (he and his sister) own the property,” Deepak said immediately after Deepa addressed media outside the bungalow. Deepak also claimed that she was “manhandled” by private guards posted at the bungalow, but those present inside said she was not attacked.

Speaking to reporters, Deepa said the guards attacked a TV camera crew present at the residence. She said that she has sought an appointment with Prime Minister Narendra Modi to apprise him of the situation.