He will also run away: Rahul Gandhi takes a dig at PM Modi

Rahul said PM Modi said he would be country's watchman and not PM, but instead he became 'watchman for only 15 to 20 rich people.' 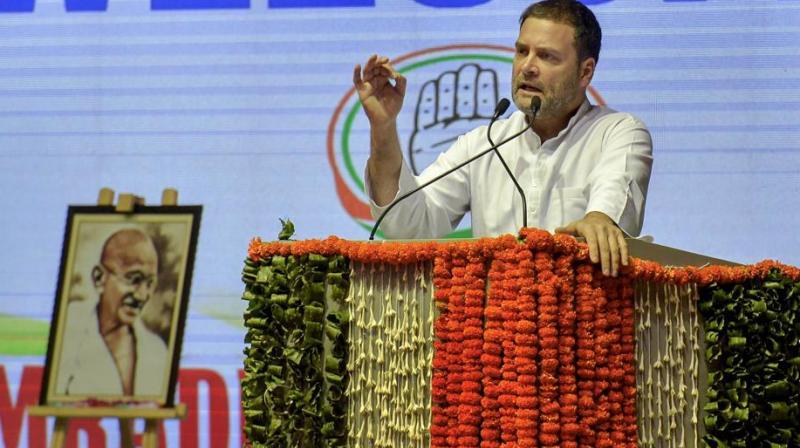 Congress president Rahul Gandhi said, 'Nirav Modi and Mehul Choksi ran away with Rs 35,000 crore, Vijay Mallya took off with Rs 9,000 crore and even Lalit Modi decamped... But he says nothing... He will also run away.' (Photo: PTI)

Mumbai: Without directly naming Prime Minister Narendra Modi, Congress president Rahul Gandhi on Tuesday compared him to prominent fugitives and expressed suspicion that even “he may run away” like Nirav Modi, Vijay Mallya and Lalit Modi.

“Nirav Modi and Mehul Choksi ran away with Rs 35,000 crore, Vijay Mallya took off with Rs 9,000 crore and even Lalit Modi decamped... But he says nothing... He will also run away,” Rahul Gandhi said, addressing a meeting of his party’s booth-level workers in suburban Goregaon.

Launching his sharpest attack on the Bharatiya Janata Party (BJP) and Prime Minister Narendra Modi yet, Rahul Gandhi claimed there was “fear” now in Modi’s voice.

“Unki awaaz me ek ghabraahat hai (There is fear in his voice)... The Prime Minister runs the country through ‘bhaashans’ (speeches) only... But I am not scared as I am a soldier of truth,” the Congress chief said amid spontaneous rounds of claps punctuating his speech.

Rahul Gandhi said PM Modi had contended that he would be a watchman of the country and not the Prime Minister, but instead he has become “a watchman for only 15 to 20 rich people”.

Rahul Gandhi said the country is suffering under the “lies” of Prime Minister Narendra Modi, while the Congress always stood for the truth.

Accusing the BJP and PM Modi of spreading hatred throughout the country, Rahul Gandhi pointed out that the Congress has always united India and taken everybody along.

Earlier during the day, Rahul Gandhi, who attended a court hearing in a defamation case in Bhiwandi (in adjoining Thane district), said: “Ours is a fight of ideology and the system... Let them file any number of court cases against me, I shall fight them... I am not bothered.”