India hopes that any resolution on denuclearisation of Korean peninsula will address concerns over N Korea's nuclear proliferation linkages. 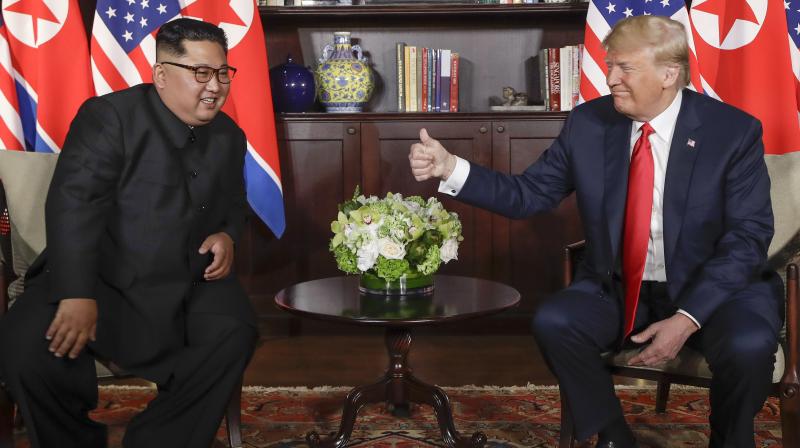 Trump said, 'We signed a joint statement that is an unwavering commitment to complete denuclearisation of North Korea.' (Photo: AFP)

New Delhi: India on Tuesday welcomed the historic summit between US President Donald Trump and North Korean leader Kim Jong-Un as a "positive development" and hoped that any resolution on denuclearisation of the Korean peninsula will address its concerns over Pyongyang's nuclear proliferation linkages.

Soon after Trump and Kim signed a "comprehensive" document promising to end seven decades of hostilities between the two countries, the External Affairs Ministry said India supports all efforts to bring about peace and stability in the Korean Peninsula through dialogue and diplomacy.

India has been pressing for a probe into Kim regime's proliferation linkages so that those responsible for it are held accountable.

Following their summit in Singapore, Trump and Kim pledged to denuclearise the Korean peninsula and work for finding a peaceful resolution to seven decades of hostilities between the two countries.

"India welcomes the US - DPRK (Democratic People's Republic of Korea) Summit held in Singapore. This is a positive development. India has always supported all efforts to bring about peace and stability in the Korean Peninsula through dialogue and diplomacy," the External Affairs Ministry said.

After the talks, the US president said that the process of denuclearisation on the Korean peninsula will begin "very soon" and the North Korean leader promised to leave the past behind.

"We hope that the outcomes of the US-DPRK Summit will be implemented, thus paving the way for lasting peace and stability in the Korean Peninsula," the ministry said.

Trump said, "We signed a joint statement that is an unwavering commitment to complete denuclearisation of North Korea."

According to some media reports, Pakistan had secretly supplied North Korea with nuclear enrichment technology when A Q Khan headed the country's nuclear programme.

In April, Kim and South Korean President Moon Jae-in had held a historic summit to bring lasting peace in the Korean Peninsula.