'The plot to assassinate PM Modi and Fadnavis seems mysterious and story of a horror film,' said editorial in Shiv Sena mouthpiece 'Saamna'. 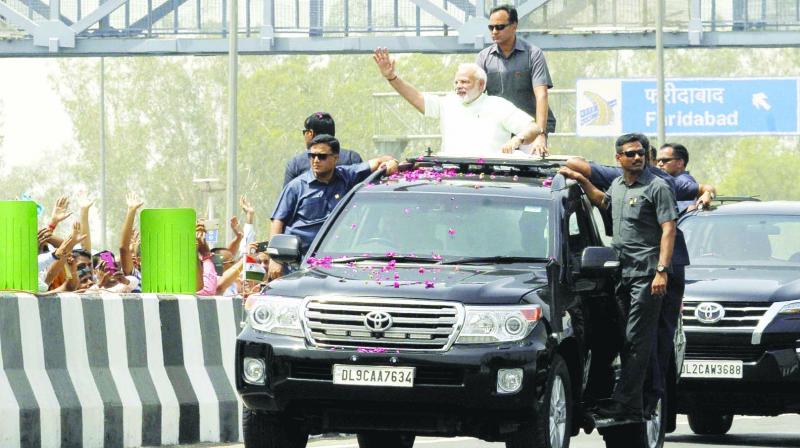 The Shiv Sena said PM Modi's security is as strong as Mossad (Israel's intelligence agency) and it is virtually impossible for anybody to penetrate it. (Photo: File)

Mumbai: The Maharashtra government's claim about a Maoist plot to assassinate Prime Minister Narendra Modi was on Tuesday questioned by the BJP's ally Shiv Sena, saying that the claim "does not seem to be legitimate".

As a high-level meeting presided by Union Home Minister Rajnath Singh decided to strengthen the security of PM Modi, the BJP slammed opposition parties for claiming that the plot could be a publicity ploy and said it was the "lowest point of insensitivity and politics".

The comments came against the backdrop of a claim by Maharashtra police that Maoists were plotting assassination of the prime minister and Chief Minister Devendra Fadnavis.

The police, after arresting five people with alleged Maoist links last week, had said that a letter was seized from the house of one of them in which there was a suggestion about assassinating PM Modi in "Rajiv Gandhi-type incident".

"The plot to assassinate them (PM Modi and Fadnavis) seems mysterious and the story of a horror film," said an editorial in Shiv Sena mouthpiece 'Saamna'.

Quoting contents of the purported Maoist letter, the editorial said, "Modi has succeeded in forming governments in 15 states. If this continues, the organisation will be in trouble. And thus, Modi should be eliminated. All this was revealed by the police, which seems laughable."

It said the issue is being milked for political purpose, adding, "this conspiracy does not seem to be legitimate, is what being said by the experts."

The Shiv Sena said PM Modi's security is as strong as Mossad (Israel's intelligence agency) and it is virtually impossible for anybody to penetrate it.

Earlier, Pawar raised doubts over the veracity of the threat letter.

"The BJP has realised that they are losing the popular support. In order to gain sympathy, the BJP is now playing the threat letter card. However, I am sure that the people will not fall prey to such tactics," he said at a function in Pune on Monday.

"I have spoken to a senior retired police officer who told me that when such letters come they do not go to media but to the security agencies which make sure that adequate security measures are taken," the former chief minister said.

Fadnavis hit out at Pawar, saying he was not expected to "stoop to this level". In a tweet in Marathi, Fadnavis said that "Pawar ji should play politics of the nation and not politics of hatred."

Questioning the veracity of the threat letter seized by police, senior Congress leader P Chidambaram said it is "unverified", and noted that it was government's duty to provide foolproof protection and security to the prime minister.

"I do not think you should take all these unverified letters as though they are official documents. Such letters will float about," Chidambaram told reporters when asked about the threat letter.

Union minister Prakash Javadekar said everybody should have condemned such an attempt, more so as India has lost two prime ministers to violence.

"People are still not sensitive," the BJP leader said at a news conference in Delhi.

Javadekar said instead of questioning those who wrote the letter opposition parties were questioning as to how it came to the fore.

"This is the lowest point of insensitivity and politics".