'Our fight is against the policies of PM. Farmers are frustrated and the PM does not talk about employment for youth,' Gandhi said. 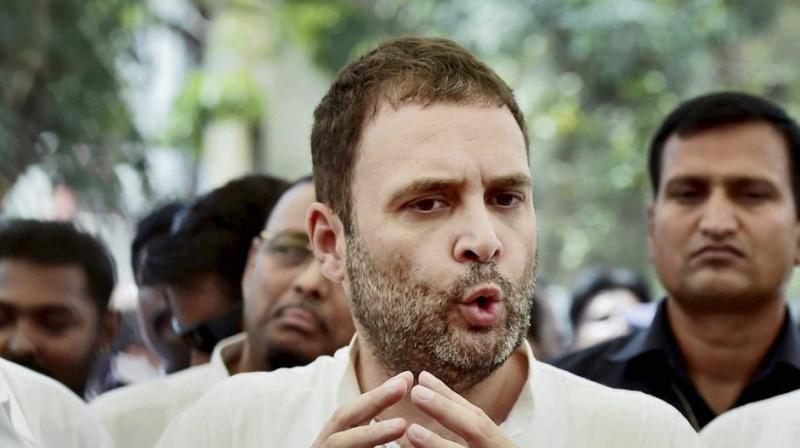 'Let them (the BJP and the RSS) slap as many cases as they want against me. Ours is a fight of ideology. We will fight them and win,' Gandhi said. (Photo: PTI)

Thane (Maharashtra): Congress president Rahul Gandhi on Tuesday slammed Prime Minister Narendra Modi for not talking about employment for youth and farmers and said his fight was against the government's policies.

Gandhi, who appeared before a court in Bhiwandi town in Thane in connection with a defamation case filed against him by a Rashtriya Swayamsevak Sangh (RSS) worker, also dared the BJP and the RSS to slap as many cases on him as they wanted to.

"Our fight is against the policies of the prime minister. Farmers are frustrated and the prime minister does not talk about employment for youth. This government is only for the rich," Gandhi told reporters outside the Bhiwandi court.

He took a swipe at Modi's radio programme 'Mann ki Baat' and said the prime minister does not speak about 'kaam ki baat' like providing employment to youth or safeguarding farmers.

"Let them (the BJP and the RSS) slap as many cases as they want against me. Ours is a fight of ideology. We will fight them and win," Gandhi said.

On May 2, the court in Bhiwandi had asked Gandhi to appear before it on Tuesday to record his plea in the defamation case filed by RSS worker Rajesh Kunte in 2014.

Kunte had filed the case after watching Rahul Gandhi's speech at an election rally in which he had claimed that the RSS was behind the killing of Mahatma Gandhi.

The Congress chief arrived in Mumbai on Tuesday morning on a two-day visit to Maharashtra and is expected to address party workers and interact with its corporators in the Brihanmumbai Municipal Corporation.