India   All India  12 Jun 2019  Amid rumblings for single leader, AIADMK decides to continue with dual leadership
India, All India

Amid rumblings for single leader, AIADMK decides to continue with dual leadership

AIADMK said status quo will prevail and CM K Palaniswami and his deputy O Panneerselvam will jointly continue to steer the outfit. 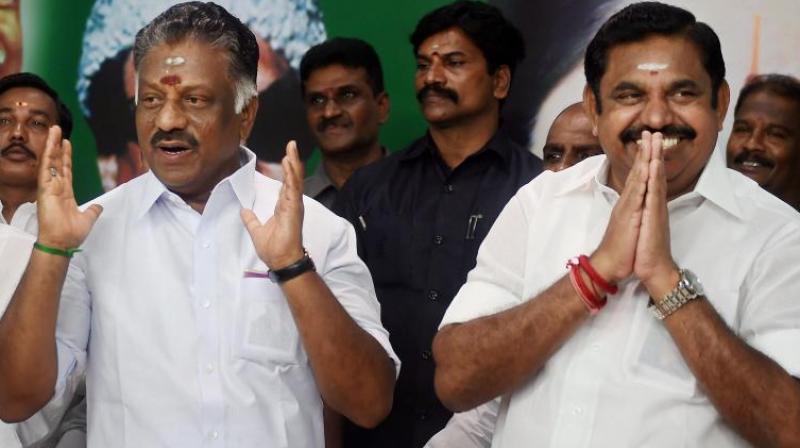 Senior AIADMK leader R Vaithilingam and State Ministers D Jayakumar and K T Rajendra Balaji said it has been decided that the present arrangement which gave full powers in the party to Palaniswami and Panneerselvam will continue. (Photo: PTI)

Chennai: Amid rumblings for a single leader to head the party, the ruling AIADMK on Wednesday said status quo will prevail and Chief Minister K Palaniswami and his deputy O Panneerselvam will jointly continue to steer the outfit.

Senior AIADMK leader R Vaithilingam and State Ministers D Jayakumar and K T Rajendra Balaji said it has been decided that the present arrangement which gave full powers in the party to Palaniswami and Panneerselvam will continue.

After deliberating on the question of leadership for about two hours at a specially convened meet here, the party vowed to win the civic polls that are expected shortly and start working for it immediately.

"The dual mode of leadership will continue to be on...there is no change in it," Vaithilingam, a senior leader and deputy coordinator of the party told reporters emerging out of the meeting at party headquarters.

The AIADMK convened a meet of its seniors, MPs, MLAs and Ministers, days after MLAs V V Rajan Chellappa and R T Ramachandran urged the party leadership to go in for a single leader following the party's dismal performance in the Lok Sabha polls. Jayakumar said there was no issue or problem in respect to the question of who should lead the party.

He said "status quo" will be maintained; the Chief Minister and his deputy will continue to helm the AIADMK. Downplaying the leadership issue, he said Wednesday's meeting was a routine affair to take stock of the situation following the general elections. Asked if a pre-poll tie up with the BJP was an issue, he said it was "not an issue at all."

K T Rajendra Balaji said with the support of all, it was decided the present party structure of coordinator and co-coordinator will continue.

Asked if this meant the demand of Chellappa (and another MLA) had been rejected, he said the decision was taken with his support too. To a question on general council meeting, he said such decisions will be announced by the Chief Minister and deputy Chief Minister. The party, in a statement, meanwhile warned of disciplinary action against functionaries who expressed their views on intra-party affairs in public.

The AIADMK said only the party's official spokespersons could talk on the organisation's stand on any issue after ascertaining the position from the leadership. Meanwhile, wall posters by a party functionary exhorting Palaniswami to take up the post of general secretary created a flutter. Three MLAs who had sided with Dhinakaran - A Prabhu E Rathinasabhapathy and V T Kalaiselvan - were not invited for the meet.

The trio was issued notices seeking explanation by Speaker P Dhanapal over alleged anti-party activities under the anti-defection law and subsequently the notices were stayed by the Supreme Court.