'Her thanksgiving cannot make us forget that Biharis are being assaulted in Bengal and forced to leave the state,' JD(U) spokesperson said. 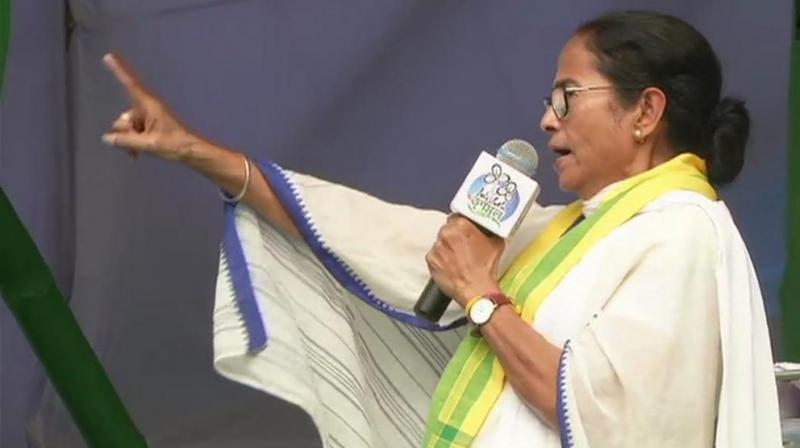 Banerjee, who is bitterly opposed to the BJP, which has made deep inroads in West Bengal, was later quoted by the media as having said, 'I have come across a statement from Nitishji that he will not form alliance with the NDA outside Bihar. I would like to congratulate him. Thank you to him.' (Photo: File)

Patna: Janata Dal (United), heading the NDA government in Bihar, said on Tuesday that West Bengal, under Mamata Banerjee's leadership, is fast turning into a "mini Pakistan" from where Biharis are being driven out by "Rohingyas".

The scathing criticism of the West Bengal government by JD(U) followed close on the heels of Banerjee lauding her Bihar counterpart Nitish Kumar for deciding to contest assembly polls in four states separately.

"What is happening in West Bengal is a matter of grave concern. I have been saying this for long. I do not understand why she has thanked and commended our chief minister. Maybe she is happy that the JD(U) is contesting elections in four states on its own, not as a part of the NDA," JD(U) spokesperson Ajay Alok told a news channel in Patna, according to news agency Press Trust of India.

"But this gesture does not absolve her of her mistakes. She must act to prevent her state from degenerating into a mini-Pakistan," said the JD(U) spokesperson.

"Her thanksgiving cannot make us forget that Biharis are being assaulted in West Bengal and forced to leave the state," he added.

The Janata Dal (United), headed by Bihar Chief Minister Nitish Kumar as its national president, resolved on Sunday to contest the assembly polls in Delhi, Jharkhand, Jammu and Kashmir, and Haryana as part of its efforts to gain the status of a national party.

Banerjee, who is bitterly opposed to the BJP, which has made deep inroads in West Bengal, was later quoted by the media as having said, "I have come across a statement from Nitishji that he will not form alliance with the NDA outside Bihar. I would like to congratulate him. Thank you to him".

"Mamata didi should remember that Biharis are being driven out of her state under her watch. And the ones forcing our people to flee her state are not Bengalis. They are Rohingyas," Ajay Alok said without elaborating.

According to news agency PTI, a group of BJP supporters in West Bengal were recently rebuked publicly by Mamata Banerjee when they chanted "Jai Shri Ram" as her cavalcade drove past them. Media reports said Banerjee had accused them of being "outsiders".

A couple of days ago, people travelling from Kolkata to Patna by a bus were allegedly beaten up by the owner and other staffers of a road-side hotel in Burdwan district. The incidents drew sharp criticism from Bihar Deputy Chief Minister Sushil Kumar Modi, a senior BJP leader.

Sushil Modi accused the ruling Trinamool Congress in West Bengal of orchestrating attacks on Hindi speaking people in general and Biharis in particular.

"It is obscene. We have been saying for the past couple of years that the ruling dispensation at the Centre is desperately creating a pre-partition situation in Bengal," said RJD's Rajya Sabha member and national spokesperson Manoj Jha.

"The baseless and denigrating statement from the JD(U) leader (Ajay Alok) simply blurs the distinction between reality and prejudice," he added.