The state officials said water samples have been taken for analysis 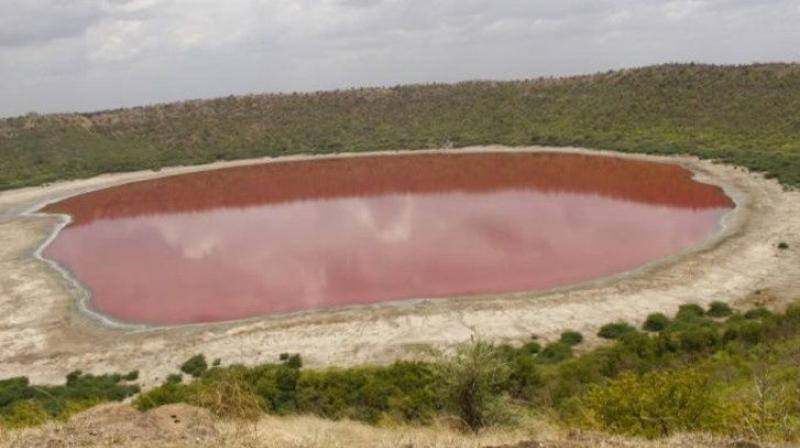 Mumbai: Maharashtra’s Lonar Lake, the world's third-largest crater formed because of a meteorite strike, has found itself in news with its water colour turning pinkish red in the last couple of days. The phenomenon has created anxiety as well as excitement among the local residents and nature experts.

The lake in Buldhana district was created due to meteorite fall on earth some 50,000 years back. The state officials said water samples have been taken for analysis.

The water colour of Lonar Lake, also known as Lonar crater, has turned from its normal bluish-green to a pinkish red shade. According to locals, it is not the first time that the lake water colour has changed. But the intensity this time is much higher than the previous occasions. The lake water is highly alkaline in nature with a pH level of 10.5.

Situated inside the Lonar Sanctuary in Buldhana district, the lake is one of the natural wonders in the world that was formed around 52,000 years ago when a meteor crashed into the earth. It is the largest basaltic impact crater on the planet and a notified National Geo-Heritage Monument. A popular tourist hub, the lake attracts around 400,000 tourists annually, besides scientists, from around the world.

According to scientist Yogesh Shouche, the change in water colour might have happened due to higher alkalinity and increased presence of algae in the lake.

“There is also a possibility of alkalinity of lake water rising due to receding water levels in summer, which might have led to increase in the number of bacteria resulting in water colour turning red. However, a correct analysis can be made only after a proper analysis of the water,” he said.

Saifan Nadaf, the tehsildar of Lonar said, “In the last two-three days, we have noticed that the colour of lake water has changed. The forest department officials have been asked to collect a lake water sample for analysis and find out the reason.”