India   All India  12 Jul 2017  Violence will infuse more violence: Voices at 'Not In My Name' on Amarnath attack
India, All India

Violence will infuse more violence: Voices at 'Not In My Name' on Amarnath attack

The organisers of the campaign had come under fire from leaders of the ruling dispensation, immediately after Monday night's attack. 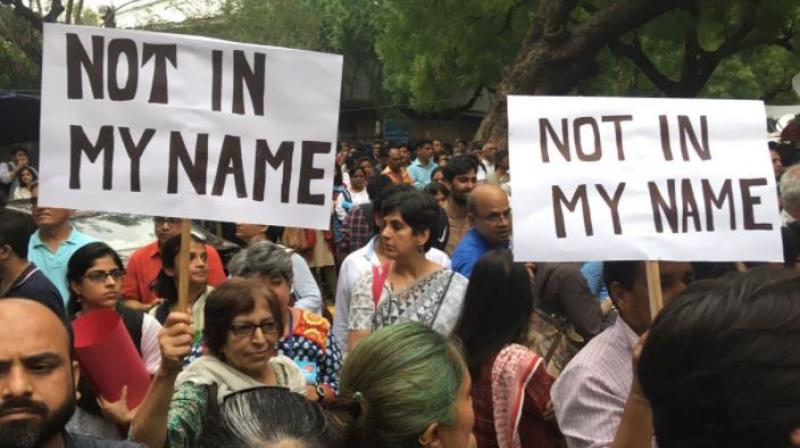 Protestors at the Not in My Name campaign (Photo: Twitter/ @shahidtantray)

New Delhi: The news of terrorists spraying bullets on Amarnath pilgrims has only strengthened Imad Ul Riyaz's conviction: "we cannot let violence eat us up".

Riyaz, a Kashmiri student in Delhi, was among the many faces, young and old, at the 'Not In My Name' protest at Jantar Mantar in New Delhi, against the killings of seven pilgrims.

"Violence will only infuse more violence. No matter which side is involved, hatred cannot be propagated. It will lead to retribution, which will result in more alienation," Riyaz, who graduated from Delhi University's Ramjas College, said.

The organisers of the campaign had come under fire from leaders of the ruling dispensation, immediately after Monday night's attack.

BJP spokesperson GVL Narsimha Rao had tweeted: "On Amarnath killings, is 'Not In My Name' gang protesting or are protests only for Akhlaqs, Junaids, Pehlu Khans & Not4Lord Shiva devotees?"

"We are a campaign of concerned citizens and we cannot spend our time reacting to what others say and how others define us. We are defining ourselves and we have been consistent in our stand and our stand is that we are against violence, we stand against hatred," filmmaker Saba Dewan, one of the organisers, said.

Artists, activists and commentators including filmmaker Rahul Roy, Shabnam Hashmi, Gauhar Raz, Kavita Krishnan, Saba Naqvi and Tehseen Poonawala were among the prominent faces at the protest venue, in what was a rain-washed evening.

"All lives matter and dead bodies should not become part of a politics that divides people on the basis of religion. The seven dead did not deserve to die and its is only when we stand up and demand an end to this politics of hatred that we can prevent the deaths of innocents going on a pilgrimage or returning from Eid shopping," a statement released by the organisers said.