BJP leaders say that 'the one on one meeting between both leaders will put an end to all rumours about the future of alliance in Bihar'. 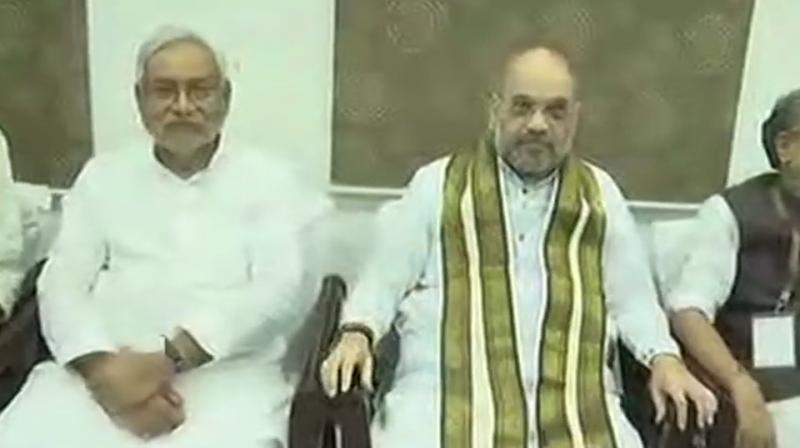 This will be Amit Shah’s first Bihar visit after his party lost the assembly elections in 2015.  (Photo: ANI | Twitter)

Patna: BJP president Amit Shah today arrived at Patna and met Bihar Chief Minister Nitish Kumar at the Patna guest house. The leaders will have an extensive meeting over the dinner tonight where they are expected to discuss seat sharing and other important issues.

BJP leaders say that “the one on one meeting between both leaders will put an end to all rumours about the future of alliance in Bihar”.

Party leaders in Patna told this newspaper that Amit Shah will meet Bihar Chief Minister over breakfast at the state guest house but the issue of seat sharing and poll strategies will come up for discussion during dinner.

“Amit Shah will be busy for the entire day with organizational meetings but he will have breakfast with Nitish Kumar at the state guest house where he will be staying and then both the leaders will meet over dinner at CM house”, BJP state president Nityanand Rai said.

The meeting was organized earlier this month after BJP and JD (U) leaders gave divergent statements on seat sharing fuelling speculations of a rift between the two parties. Some of the earlier statements made by JD (U) also suggests that the party wants a larger share of seats in Bihar for the 2019 general elections.

However, Chief Minister Nitish Kumar’s statement after JD (U) national executive meeting earlier this week that “the party is yet to receive a proposal on seat sharing” has ended speculations regarding growing rift within the NDA in Bihar.

"There is no doubt that the party has benefited under Amit Shah's leadership. His Bihar visit will be historic". BJP state president Nityanand Rai told reporters in Patna on Wednesday.

He further said that “Besides seat sharing both the leaders will also be discussing poll strategies during their meeting”.

This will be Amit Shah’s first Bihar visit after his party lost the assembly elections in 2015.  According to the state leaders, BJP Chief will be addressing a gathering of 10,000 Shakti Kendra managers from across the state. He will also review party’s expansion work and assess poll preparations for the 2019 general elections during his Patna visit today.

Around 55000 booth level committees have been set up to woo voters at the grass root level.  A detailed report on the state poll preparations will also be put before BJP President Amit Shah during his meetings with state leaders today.