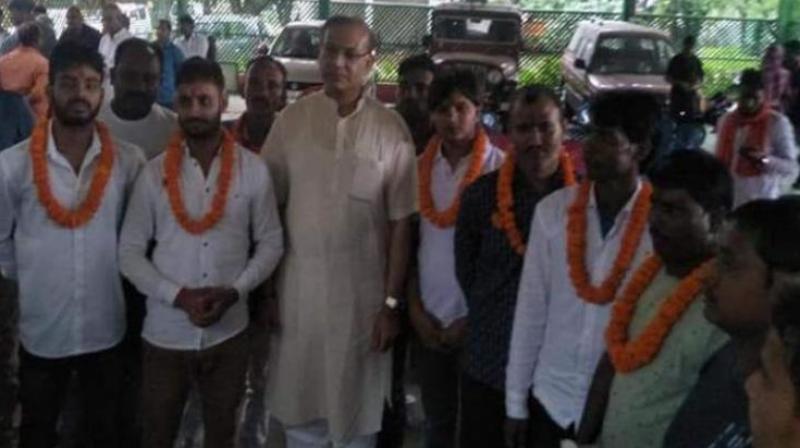 On July 6, a photograph went viral in which Jayant Sinha was seen garlanding eight convicts out on bail in a lynching and murder case. (Photo: File)

Mumbai: Union Minister Jayant Sinha on Thursday lashed out at Congress chief Rahul Gandhi for taking the attack against him at a “personal level” and challenged him to a “live debate” amid row over felicitating Jharkhand lynching convicts.

In a statement on Twitter Sinha said, “If he (Rahul Gandhi) thinks that my personal conduct is ‘disgusting’ then let’s debate it in a civilized manner.”

"Let him not hide behind his social media handles and practice shoot-and-scoot politics," he added.

I invite Sh. @RahulGandhi ji to a live debate. pic.twitter.com/7c3cE18uKE

Rahul Gandhi on Tuesday supported an online petition that sought withdrawal of Jayant Sinha’s Harvard alumni status after he felicitated convicted of lynching.

The Union Minister was not only slammed by the Opposition, but also by his father and former finance minister Yashwant Sinha.

As outrage over his action grew, Jayant Sinha, on Wednesday, “expressed regret” over the incident which was seen as a support to cow vigilantes sentenced to life imprisonment in murder.

The minister reiterated his stand on Thursday and said he did not “intend to condone vigilantism” and regretted “if that’s the impression I gave”.

On July 6, a photograph went viral in which Jayant Sinha was seen garlanding eight convicts out on bail in a lynching and murder case.

A group of people had lynched Alimuddin Ansari, 40, in Bazaar Tand locality of Jharkhand’s Ramgarh town on June 29, 2017, on the suspicion that he was carrying beef in his car.

In March this year, a fast track court convicted 11 people for lynching. However, last week, the Jharkhand High Court suspended the life sentence of eight persons.