BJP chief Amit Shah played down reports of rift with coalition partner, said BJP will continue to ally with JD(U) in Bihar. 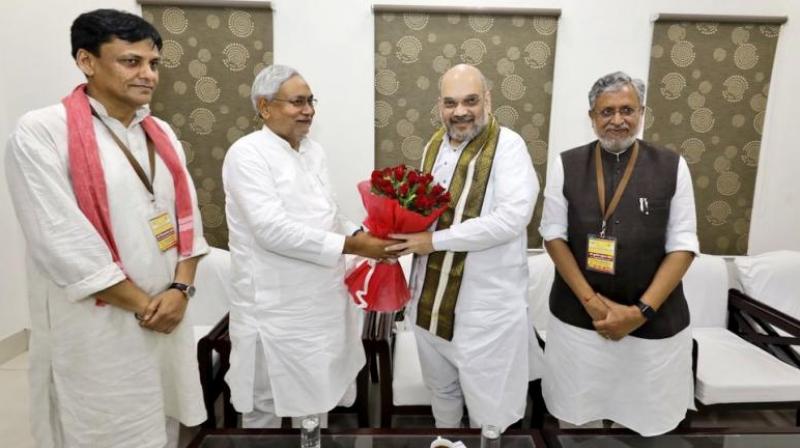 Patna: Playing down reports of differences among coalition partners, BJP president Amit Shah, who was in Patna on Thursday, said that the BJP will continue to ally with JD(U) in Bihar.

While referring to some of the earlier statements made by Grand Secular Alliance leaders, especially the Congress party, against the BJP-JD(U) relationship in Bihar, Shah said that “Nitish Kumar returned to NDA fold because he couldn’t continue with corrupt people. Our alliance is strong and will contest together in 2019”.

Shah gave the statement while addressing BJP workers and around 10,000 Shakti Kendra managers and Vistaraks at Patna’s Gyan Bhawan.

Later in the evening, he met Chief Minister Nitish Kumar at his residence in Patna over dinner where sources said that the two leaders discussed various important issues including seat allocation between BJP and JD(U) for 2019 general elections.

The meeting assumes significance because both the parties had been at loggerheads over issues of seat allocation and also as to who will play the role of big brother in the 2019 general elections.

Nitish Kumar has been worried about the issue and wanted BJP to discuss the seat-sharing formula for 2019 general elections and settle it on “equal terms”.

Reports suggest that the BJP is not willing to go with 2009 formula where JD(U) had contested on 25 seats and won 20 seats in Bihar. The 2015 assembly election formula was also recently turned down by senior BJP leaders.

Sources say that Amit Shah during his two meetings on Thursday with Kumar assured him that the BJP will respect the JD(U)’s status in Bihar and settle the seat allocation between all allies amicably at the earliest.

“BJP is the only party which respects its alliance partners. All NDA allies including Nitish Kumar’s party JD (U) is intact and we are confident that NDA will win all 40 seats in Bihar and Narendra Modi will return as Prime Minister”, BJP chief Amit Shah said while addressing party workers in Patna on Thursday.

Political analysts are of the opinion that Thursday meal diplomacy was crucial for BJP because it wanted to send a message to the cadres on grounds that there is no trouble within the NDA.

A BJP insider told Deccan Chronicle that “the meal diplomacy will end all speculations about the future of alliance in Bihar. The divergent statements made by political leaders were sending out a message which was not healthy for the NDA.”

Nitish Kumar had cancelled a similar dinner event hosted for BJP in 2010. The issue had led to a huge embarrassment for JD(U)-BJP alliance at the national level.

This was Amit Shah’s first Bihar visit after his party lost in 2015 assembly elections but he had met Nitish Kumar in August last year over lunch to discuss political issues in New Delhi.

Apart from his meeting with Bihar CM Nitish Kumar over breakfast and dinner, Amit Shah also took stock of poll preparations in Bihar. He addressed around four meetings in Patna on Thursday – three at Gyan Bhawan and one at the state guest house.

While addressing BJP workers at Gyan Bhawan, he launched a scathing attack on the opposition party and said that Bihar was the first state from where the drive of Congress Mukt Bharat started.

“They may have combined together against the NDA but we are going to win 2019 general elections. The BJP will not rest till it forms a government in all states including West Bengal, Karnataka, Kerala and Odisha. The opposition parties’ only agenda is to remove Prime Minister Narendra Modi but our agenda is to develop the country and eradicate poverty”.

While referring to some of the recent statements made by Congress President Rahul Gandhi on the issue of the surgical strike, he said: “Rahul Gandhi doesn’t understand what surgical strike is because his party is in alliance with Lalu Yadav -- they only know what Chara (fodder) is”.