India   All India  12 Jul 2018  Once criminality of Section 377 quashed, stigma against gay sex will go: SC
India, All India

Once criminality of Section 377 quashed, stigma against gay sex will go: SC

CJI quashed mental stigma attached to homosexuality and cleared that even psychiatrists have established that it is not a mental illness. 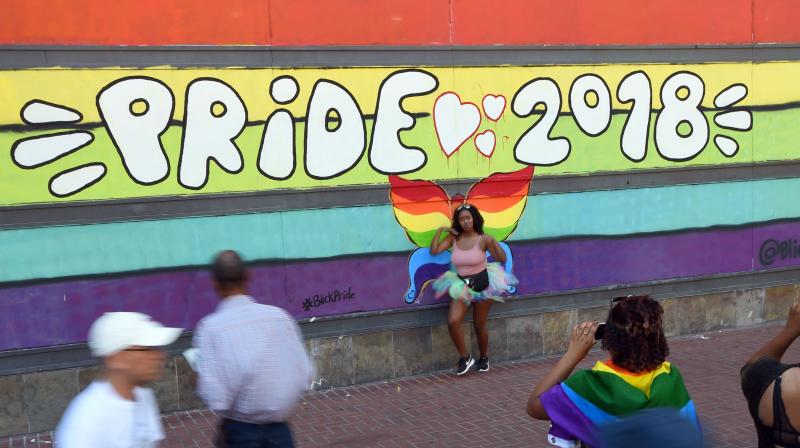 On behalf of the Centre, ASG Tushar Mehta urged the court not to enter into matters of religious beliefs while deciding the validity of Section 377. (Representational Image/PTI)

New Delhi: The Supreme Court on Thursday orally observed that stigma attached to ‘gay sex’ will be removed once the ‘criminality attached to Section 377 IPC goes” and two consenting individuals can be intimate, take up a job as there cannot be any prohibition.

Chief Justice of India Dipak Misra heading a five-judge Constitution Bench made this observation during the course of hearing a batch of petitions seeking to declare Section 377 IPC, which criminalises gay acts between two consenting adults, as unconstitutional.

Justices Rohinton Nariman, A M Khanwilkar, D Y Chandrachud and Indu Malhotra are the other judges on the Bench.

Thursday was the third day of hearing on the issue of striking down the 150-year-old colonial law on the ground of discrimination. A nine-judge bench of the apex court had already held that ‘right to privacy’ as a fundamental right and the petitioners are seeking to extend this right to gay acts also.

The CJI observed, “The LGBT community feels the stigma because of the criminality attached to gay sex and once it is removed, homosexuals can get together without any prohibition. The stigma is so because they are treated differently. Once decriminalisation is there they will feel empowered.”

Shyam Diwan, senior advocate began his argument stating that the time has come to declare "Right to Intimacy" as a part of "Right to Life" under Article 21 of the Constitution of India.

CJI Dipak Misra also quashed the mental stigma attached to homosexuality and cleared that even psychiatrists have established that it is not a mental illness.

The top court said it is not concerned with bestiality, incest or related issues but only with the constitutional validity of Section 377 of IPC as far as it concerns sexual orientation of LGBT community members.

Justice Malhotra observed that the family pressure forces gay persons to get married and that could have been the reason for them to become bi-sexual. Because of criminality attached to same-sex relationships, it had various other ramifications, she said.

Justice Malhotra said, “Rig Veda mentions about “Prakriti” (perversity) and “Vikriti” (diversity) existed together in nature and there are hundreds of species which indulge in same-sex intercourse. This community feels fear in going to get medical aid. Even doctors discriminate. There are inhibitions and prejudices even in the medical fraternity. This is a serious violation.”

Additional Solicitor General Tushar Mehta intervened and said Prakriti and Vikriti’s co-existence, as referred to in Hindu philosophical texts, are related to philosophical and spiritual spheres and must not be dragged to link it to sexuality or homosexuality.

Justice Chandrachud said, “Over the years, we have created an environment in the Indian society which has led to deep-rooted discrimination against people of same sex involved in a consensual relationship and this has impacted their mental health also. The mental health care act of 2017 in the parliament also recognised that sexual orientation should not be grounds for discrimination.”

On behalf of the Centre, ASG Tushar Mehta urged the court not to enter into matters of religious beliefs while deciding the validity of Section 377. He said since the Centre had filed an affidavit leaving to the wisdom of the court to decide the issue, the bench should steer clear of the matters of religion. He said that the court should confine its discussion to the constitutionality and legality of Section 377.

The CJI said, “We are not concerned with bestiality, incest or related issues but only with the constitutional validity of Section 377 of IPC as far as it concerns sexual orientation of LGBT community members. We will not go into other issues.”

Manoj George, lawyer appearing for two Christian associations, opposed the plea of the petitioners seeking to strike down Section 377 and submitted that the Central government has taken a U-turn.

Even as Mehta refuted this, the bench also replied that irrespective of the "concession" offered by the Central government, validity of Section 377 would still have to be decided on the anvils of judicial pronouncements and constitutional norms.

Manoj George pointed out that the Centre did not support the private bill introduced in Parliament for scrapping the section but in the court, the Centre was taking a different stand.

The CJI said, "We don't go by majoritarian morality but by constitutional morality. We are only to judge Section 377 of IPC on the touchstone of Articles 14, 19, and 21 of the Constitution.”

Arguments will conclude on July 17, when the court is expected to reserve its verdict.