The Kamal Nath government has a wafer-thin majority in the House. 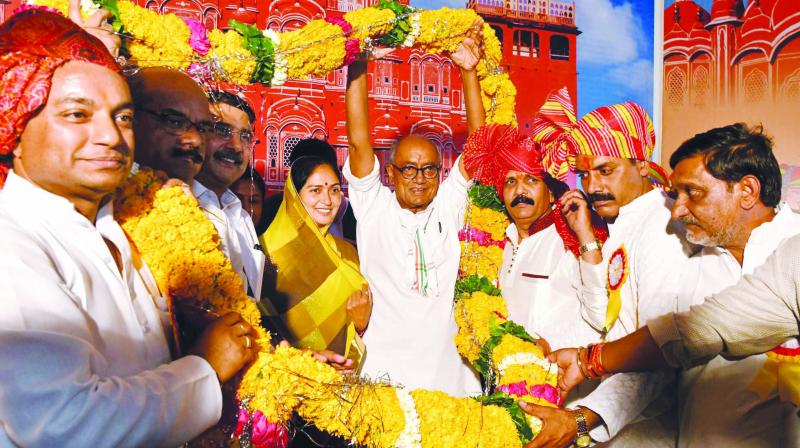 A file photo of Digvijay Singh and his wife Amrita Rai Singh being welcomed during the ‘parichay sammelan’ of Madhya Pradesh Rajput Samaj in Bhopal.

Bhopal: Veteran leader Digvijay Singh has sounded a signal to return to Madhya Pradesh politics, causing unease in the ruling Congress in the state.

Mr Singh has set at rest all speculations on his political future following his debacle in the just-concluded Lok Sabha elections in Bhopal by declaring that he would now shift to the state capital permanently to involve himself actively in its development.

“I will enlist my name in the voters’ list in Bhopal,” septuagenarian leader who is currently a voter in Rajgarh district in MP, said in an “unusual” announcement last week, creating a ripple in the ruling Congress here.

“It is a clear signal by him that he will now focus on state politics, instead of confining himself to Delhi,” one of Mr Singh’s close aides told this newspaper requesting not to be quoted.

The political “instability” currently witnessed in MP following the fractured mandate thrown up by the 2018 Assembly elections has in fact served as opportune moment for the old warhorse to begin his second innings in state politics after one and a half decades.

The former chief minister had vowed to keep him away from the state politics after the Congress led by him lost Assembly elections in 2003, ending the decade-long-rule of the party in MP.

“Mr Singh had faced the prospect of being buried into political oblivion following his massive defeat in the LS polls in Bhopal at the hands of Bharatiya Janata Party’s Pragya Singh Thakur, a political greenhorn. But, the current political instability in the state has come as a godsend for him to boost his career and launch his second innings in state politics,” a Gwalior-based political observer P. Raghuvamsi remarked.

“Mr Singh seems to have emerged the biggest gainer politically with the fractured mandate of the 2018 Assembly elections giving birth to ‘minority’ Kamal Nath government,” he quipped.

Mr Singh was keen to enter Parliament in the recently held Lok Sabha elections since his term in the Rajya Sabha was going to end in April 2020.

He has found himself in a role of troubleshooter for his “friend”, chief minister Kamal Nath, who was walking a tightrope to run his “minority” government, survived by outside support from two Bahujan Samaj Party (BSP) MLAs, lone Samajwadi Party (SP) legislator and three Independents.

The Kamal Nath government has a wafer-thin majority in the House.

The ruling Congress has strength of 114 in 230-member MP Assembly, falling short of two MLAs to gain majority in the House.

The party has formed government in the state with outside support from two BSP MLAs, one SP legislator and four Independents.

The Bharatiya Janata Party has 109 MLAs in the House.

Mr Singh’s growing influence in the Congress as well as in state administration has caused unease among some factional leaders in the ruling party, particularly former Union minister Jyotiraditya Scindia, considered his bête noir.

Mr Scindia’s camp has accused him of trying to cut their leader to size in the party to retain his supremacy in the state Congress.

In fact, several ministers in the Kamal Nath government owing allegiance to Mr Scindia, have made their displeasure public recently for being denied the privilege of choosing secretaries of their departments of their choice.

“The state administration is being remote-controlled by a powerful Congress leader,” one of them complained requesting not to be quoted.

“This may revive factionalism in the ruling party which will prove detrimental to the stability of Kamal Nath government,” he warned.