Not here to cling to power: K'taka CM in Assembly, seeks trust vote

'After all these developments, I am seeking your permission and time to prove the majority in this session,' he added. 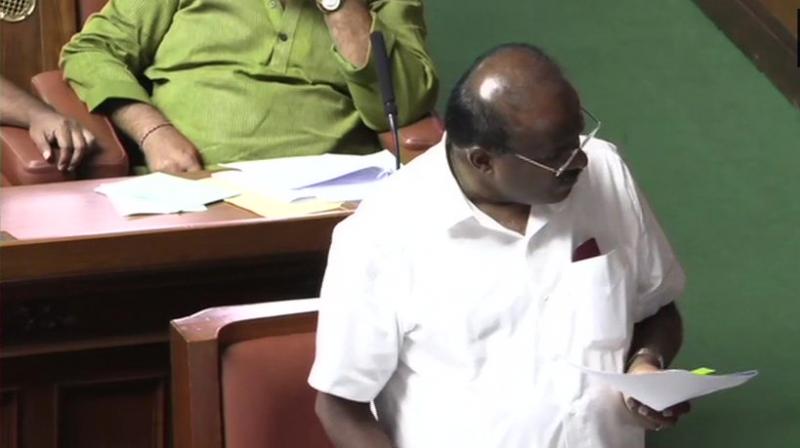 He asked Speaker K R Ramesh Kumar to fix the time for it. (Photo: ANI | Twitter)

Bengaluru: Addressing Karnataka Assembly, Chief Minister HD Kumaraswamy said he was ready for everything. He said, “I am not here to cling to power.”

“After all these developments, I am seeking your permission and time to prove the majority in this session,” he added.

He asked Speaker K R Ramesh Kumar to fix the time for it.

Kumaraswamy made the plea seeking the trust vote in the Assembly, which met here amid a flurry of political developments that have pushed his already wobbly government on the brink of collapse.

Earlier in the day, the Supreme Court had ordered a status quo until Tuesday on a plea filed by 10 dissident MLAs of Congress and JD(S) seeking a direction to the Assembly Speaker to accept their resignation and not proceed with the applications for their disqualification.

The order on status quo was given after hearing counsels--Mukul Rohtagi for the rebel MLAs and Abhishek Manu Singhvi for Speaker K R Ramesh Kumar.

The bench had on Thursday directed the Speaker to meet the rebel MLAs who were asked to give their resignations afresh in person. The speaker met them and took their resignations but did not take any decision saying he has to follow procedures and satisfy himself whether they were genuine and voluntary.

The 13-month-old Congress-JD(S) government had earlier this month slumped into crisis following the resignation of 10 MLAs.