India   All India  12 Jul 2020  Comet NEOWISE: Stargazers to witness a once in a lifetime show from this July 14
India, All India

Comet NEOWISE: Stargazers to witness a once in a lifetime show from this July 14

The comet, which would only visit us again after some 6000 years, could be seen with naked eyes for the next 20 days 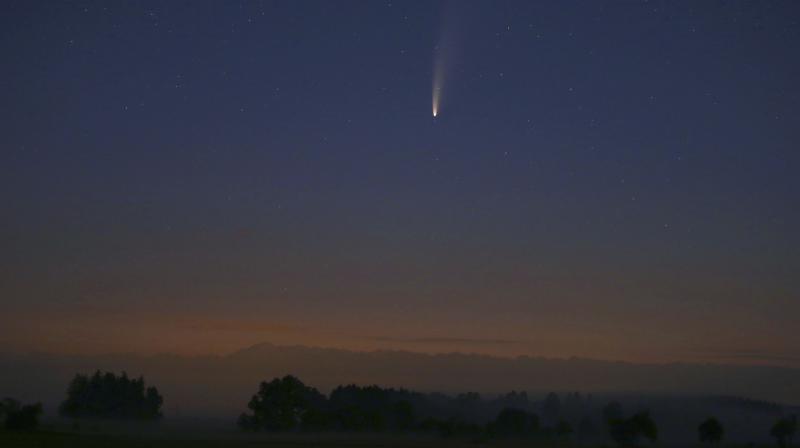 The comet Neowise or C/2020 F3 is be seen before sunrise over the Allg'u landscape, in Bad W'rishofen, Bavaria. (AP)

Hyderabad: Our skywatchers are in for a treat this month as the C/2020 F3 comet, deemed to be one of the brightest comets to pass earth in decades, would become visible to earthlings from July 14 onwards. Called C/2020 F3 NEOWISE and nicknamed comet NEOWISE, the comet will be visible to the naked eye for 20 minutes every day for the next 20 days, until August, reports say.

"From July 14, C/2020 F3, a comet discovered on March 27, will be clearly visible in the north-western sky. It will be visible after sunset for around 20 minutes for the next 20 days. People can observe it with naked eyes," Odisha planetarium’s Deputy Director, Dr Subhendu Pattnaik, told ANI. The comet will make its closest approach to Earth on July 22-23.

The comet was first discovered by NASA’s Near-Earth Object Wide-field Infrared Survey Explorer, or NEOWISE, in March. The comet made its once-in-our-lifetime close approach to the Sun on July 3, 2020, and will cross outside Earth's orbit on its way back to the outer parts of the solar system by mid-August, NASA reports. The next time it visits? That will be in 8,786, almost over 6,000 years later.

Comets are cosmic snowballs of frozen gases, rock and dust that orbit the Sun in a highly elliptical path. When frozen, they are of the size of a few hundred kilometres, or to simply put it, the size of a small town. When a comet's orbit brings it close to the Sun, it heats up and melts, thereby releasing a large amount of dust and gases into a giant glowing head larger than most planets.

About this particular comet, "From its infrared signature, we can tell that it is about 5 kilometres [3 miles] across,” says Joseph Masiero, NEOWISE deputy principal investigator at NASA's Jet Propulsion Laboratory in Southern California, USA. “We can tell that the comet's nucleus is covered with sooty, dark particles leftover from its formation near the birth of our solar system 4.6 billion years ago," he adds.

What we will be able to see is a stunning show, made of dust and gases that form a tail that stretches millions of kilometres away from the Sun in the opposite direction. As known to humankind till now, there are 3,650 comets orbiting the sun currently.