As many as 76 people have died as to flood hit in Kerala while 58 have been reported missing in landslides. 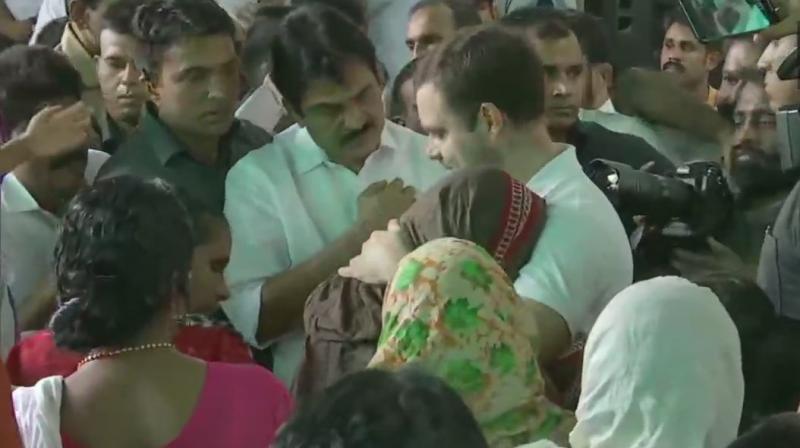 Thiruvananthapuram: As floods wreak havoc in Kerala, Congress leader Rahul Gandhi, while camping in his Wayanad Lok Sabha constituency in Kerala, on Monday urged people to provide relief materials to those hit by the devastating floods.

"As your MP, I called the state Chief Minister and requested him to help here as aggressively as possible. I also called the Prime Minister, explained the tragedy that has taken place here and the need for support from the Centre," said Rahul Gandhi.

Rahul Gandhi and Congress leaders also distributed relief material to the people at a relief camp in Wayanad's Kaithapoyil.

Listing the essential items that are in shortage, Rahul Gandhi, who has been visiting areas affected by floods and landslides in his constituency since Sunday, posted an appeal on his Facebook page.

"My Parliamentary constituency Wayanad has been devastated by floods with thousands left homeless and shifted to relief camps," Gandhi said.

As many as 76 people have died as to flood hit in Kerala while 58 have been reported missing in landslides.

In Malappuram district, alone at least 11 people have been killed and around 50 others are missing after a landslide hit Kavalappara village following incessant rains in the region.

Meanwhile, Congress leader Rahul Gandhi on his visit on Sunday said the rescue operations are underway but more help is required.

"I visited Kavalappara, the site of the landslide in Bhoothanam. Several people are still trapped and rescue operations are underway but more help is required immediately," the Congress tweeted.

Shri @RahulGandhi visited Kavalapara, the landslide site in Bhoothanam, where several people are still trapped & emergency forces are working around the clock to save them. pic.twitter.com/5EEUtkMn7y

Kerala and its neighbouring states have been receiving relentless rains since the past few days. Several isolated pockets of the state have been submerged due to swelling of rivers.

Rescue operations are being carried out by the National Disaster Relief Force (NDRF), Army and the local police.

The rescue operation teams were seen evacuating senior citizens, women, children, and others by carrying them either on their shoulders or palanquins through the debris of landslides and floodwater.