‘I have announced Rs 50 lakh from MP Local Area Development Scheme (MPLADS) fund, for Kolhapur and Sangli districts,’ he said. 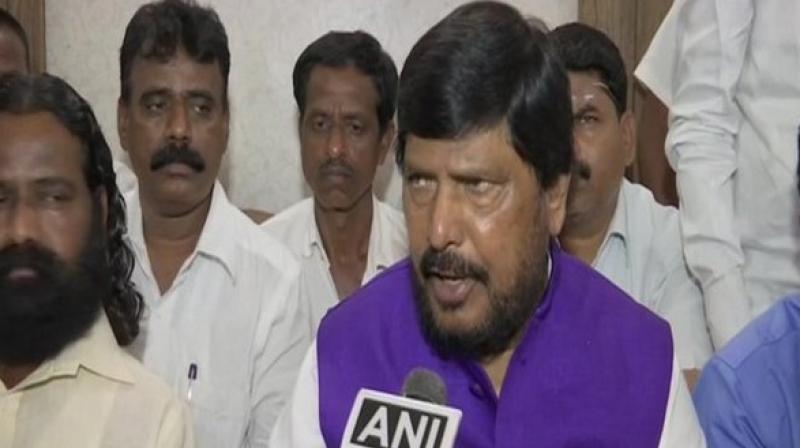 Kolhapur: Minister of State (MoS) for Ministry of Social Justice and Empowerment, Ramdas Athawale on Monday announced he will give Rs 50 lakh from his MP fund for relief work in the flood-affected Kolhapur and Sangli districts of Maharashtra.

"I have announced Rs 50 lakh from my MP Local Area Development Scheme (MPLADS) fund, for Kolhapur and Sangli districts. I also urge other MPs and MLAs to help people," Athawale said.

He also thanked the National Disaster Response Force (NDRF), Army, Navy and state police for their relentless efforts in providing help to the flood-affected people.

"People are getting facilities in the temporary camps, approximately 269 villages are affected by it. The NDRF, Army, Navy and other agencies have done a commendable job of rescue and helping the people," he said.

He also extended his wishes to the members of the Muslim community on the occasion of Eid al-Adha and thanked those members of the community who were distributing food to the flood-affected people in Maharashtra and other states.

A large number of security forces have been deployed in the flood-affected areas of Sangli and Kolhapur districts.

Earlier today, women tied 'rakhis' to the rescue workers, while on Sunday some women in Maharashtra's Kolhapur district were seen tying 'rakhis' on the wrists of their "saviours", the personnel of the Indian Navy.

Pictures of women tying 'rakhis' were shared by Navy spokesperson on Twitter which were praised by netizens.