'#Eid #prayers concluded #peacefully in various parts of the #valley. No untoward incident reported so far,' J&K Police said in a tweet. 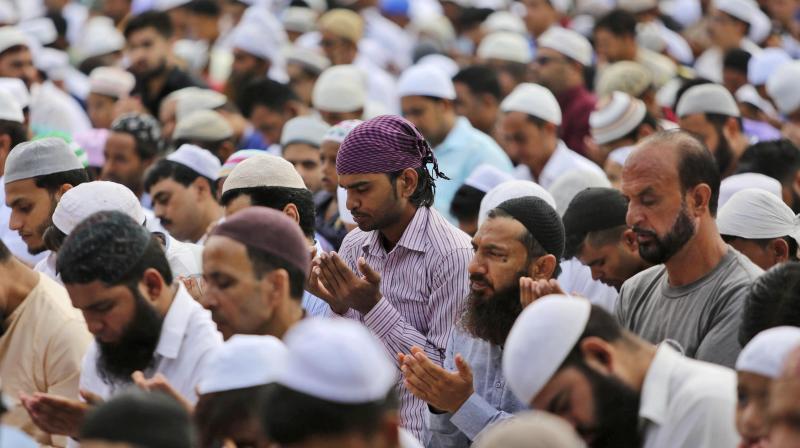 The authorities had on Sunday said people will be allowed to visit neighbourhood mosques to offer prayers. (Photo: AP)

Srinagar: Eid al-Adha prayers on Monday morning at various mosques in Kashmir concluded without any violence, police said, but the festive buzz was missing with curfew-like restrictions in place across the Valley.

Large gatherings were not allowed in any part of the Valley, an official said. Reports said Eid prayers were not allowed at major mosques. The authorities had on Sunday said people will be allowed to visit neighbourhood mosques to offer prayers.

"#Eid #prayers concluded #peacefully in various parts of the #valley. No untoward incident reported so far," the Jammu and Kashmir Police said in a tweet.

Reports said authorities distributed sweets at various mosques. On the eve of Eid al-Adha, restrictions were eased in the Valley to allow people to shop for the festival. But the usual hustle and bustle of Eid al-Adha, one of the biggest festivals in Kashmir, was missing.

Normal life in the Valley has been paralysed following heavy security deployment, restrictions on movement and curtailing of communication links after the Centre revoked Jammu and Kashmir's special status under Article 370 and moved a bill proposing bifurcation of the state on August 5.

The district administrations are constantly reviewing the situation in Jammu and Kashmir and doing their best to minimise the inconvenience caused to people during the restrictions imposed on movement, the official said. The government has also made arrangements for availability of adequate food and other essential items across the Kashmir Valley and steps are being taken to even deliver certain goods at people's doorsteps, another official said.

The government's top priority is to maintain peace and prevent any casualty and mischief in Jammu and Kashmir, he said.

Last Friday, people were allowed to visit neighbourhood mosques and offer prayers there. President Ram Nath Kovind on Wednesday declared the abrogation of special status given to Jammu and Kashmir under Article 370 after both Houses of Parliament passed a resolution in this regard. On Saturday, he gave assent to a bill passed by the Parliament for bifurcation of Jammu and Kashmir into two Union Territories -- Jammu and Kashmir, and Ladakh -- which will come into existence on October 31.