It said that certain scenes and dialogues in the movie and its trailer have been found to portray the IAF in an undue negative light. 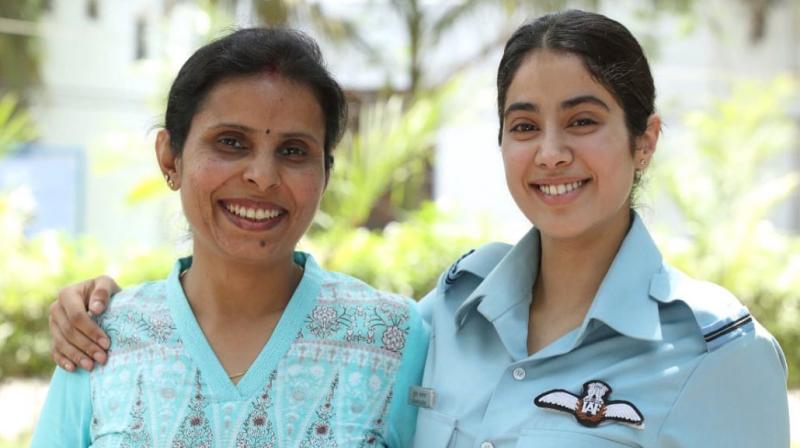 New Delhi: Indian Air Force (IAF) has protested that the movie "Gunjan Saxena: The Kargil Girl" starring Janhvi Kapoor portrays the work culture in the Air Force in a “negative light” and being discriminatory towards women officers.

The movie is inspired by Flight lieutenant Gunjan Saxena, India’s first female Air Force officer to fly in a combat zone during the Kargil war. The movie is right now being streamed on Netflix.

IAF has written to Dharma Production, Netflix and the Central Board of Film Certification (CBFC).

"IAF as a service has always ensured that the organisation is gender neutral and
has always provided an equal opportunity to both male and women personnel," said  IAF in a letter to CBFC.

Sources said that the letter mentions that as per initial understanding, Dharma Productions had agreed to represent air force with authenticity and make all efforts to ensure that the film helps to inspire the next generation of IAF Officers, said sources.

It said that certain scenes and dialogues in the movie and its trailer, which were forwarded to IAF for viewing, have been found to portray the IAF in an undue negative light. "In the aim to glorify the screen character of 'Ex-Fit Lt Gunjan Saxena', Dharma Productions presented some situations that are misleading and portray an inappropriate work culture especially against women in the IAF," said the letter.

It said that the production house was informed about the objectionable portion of the movie and was advised to delete or modify them. "However, the Production house has not deleted the scenes but had proposed a media plan in the run up to the release and inserting a disclaimer in the movie," it said. IAF said that it considers that a mere media plan and disclaimer would not be adequate to prevent the presentation of incorrect facts about the IAF.

Last month, the defence ministry had written to the Central Board of Film Certification (CBFC), Information Technology ministry and ministry of Information and Broadcasting to advise production houses to obtain "no objection" certificate from ministry of defence before the telecast of any film, documentary, web series on the Indian army theme.

Defence ministry in a letter to CBFC said that producers may also be advised to ensure that any incident which distorts the image of the defence forces or hurts their sentiments may be prevented. "It has been brought to the notice of this ministry that some production houses making films on Army theme are using content which are distorting the image of the Indian army," said the letter.