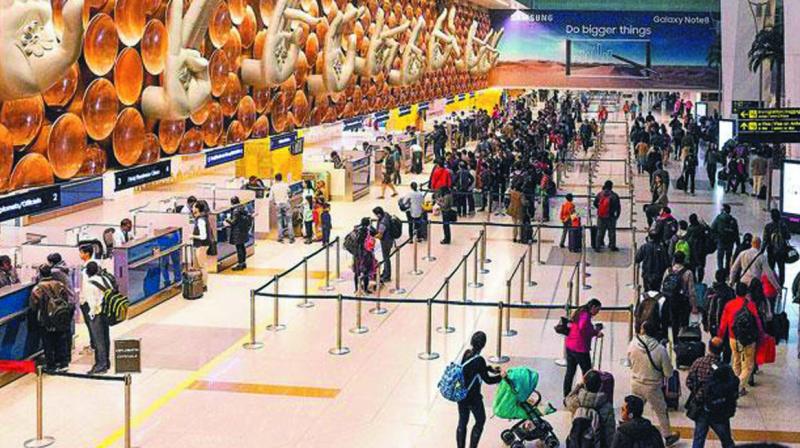 Overall, the Indian airlines also continue to underperform the industry on international routes with passenger traffic de-growth of 14.7pc in July 2019, as against 0.6pc for the industry, the ICRA observed. (Photo: Representative)

Kolkata: The Indian domestic passenger traffic (DPT) growth, which was supported by peak season demand in the previous month, plummeted to 1.8pc in July this year, according to ICRA.

For the four months of the current fiscal, the DPT has witnessed a year-on-year (Y-o-Y) growth of a mere 1.6%, the credit rating research agency stated on Thursday. This is primarily attributable to the end of tourist season, it noted.

ICRA Vice President and Co-Head, Corporate Sector Ratings, Kinjal Shah said, “The growth in the industry capacity (measured in available seat kilometres – ASKMs) continued to be muted in July 2019 at 3.5pc. This was primarily due to the eventual discontinuation of the operations of Jet Airways with effect from April 18, 2019. Furthermore, the Indian airlines have been increasing focus on international operations as witnessed in increasing capacity deployment, due to higher opportunities on international routes from India. The same is evident from increasing capacity deployment by some of the carriers on international routes.”

The aviation turbine fuel (ATF) prices had declined sequentially by 0.3pc and 5.5pc in June 2019 and July 2019, respectively, the ICRA found. However, ATF prices increased sequentially by 3.3pc and declined Y-o-Y by 7.9% in August 2019, while September 2019 again witnessed a sequential as well as Y-o-Y decline of 0.9pc and 9.1pc, respectively. The decline, however, may not have a material impact on the profitability of the airlines if they continue to witness pressure on passenger load factors (PLF), which have been declining sequentially since May 2019.

Shah added, "Given the favourable international scenario, few more airlines are likely to enter into international flying from India or expand capacities on international routes in the near future to tap the opportunity. The domestic space, however, will continue to remain critical for the carriers as it provides sizeable potential as well as feed-in traffic for the international routes. As the airlines continue to expand their fleet, resulting in a gradual correction in the demand-supply imbalance and thus a further moderation in airfares, the domestic passenger traffic growth is expected to increase in the near to medium term.”