'Mumbai-Ahmedabad bullet train fare to be around Rs 3,000'

'We hope that the work would start by March or April next year when the works will be awarded to the agencies,' said Khare. 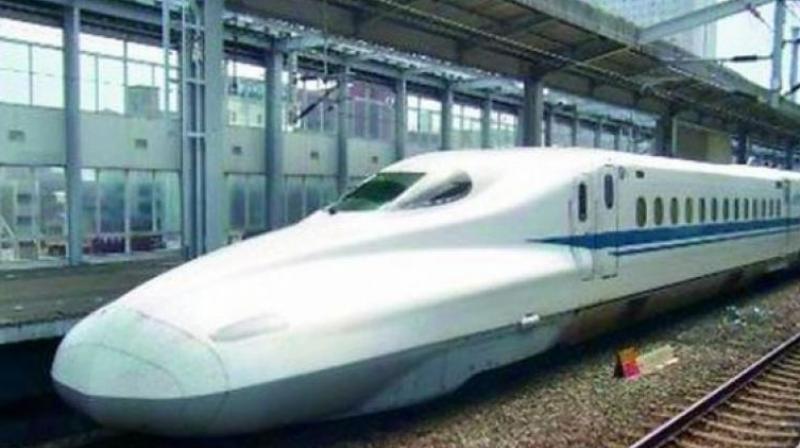 The present estimates suggest that the cost of the entire project would be Rs 1.08 lakh crore and attempts are being made to finish the project by December 2023, Khare said. (Photo: File)

Ahmedabad: The fare for the Mumbai- Ahmedabad bullet train would be around Rs 3,000, an official of the National High-Speed Rail Corporation Ltd (NHSRCL) said on Thursday.

Of the total 1,380 hectares of land required for the Mumbai-Ahmedabad high-speed rail corridor, commonly known as the bullet train project, so far 622 hectares of land, which comes to around 45 percent, has been acquired, the official said.

"Our land requirement for this entire project is 1,380 hectares, which includes private, government, forest and railway land (in Gujarat and Maharashtra). So far, we have acquired 622 hectares (45 percent). We are moving ahead keeping in mind the deadline of December 2023," Achal Khare, Managing Director of the NHSRCL, which is executing the project, told reporters. "Upon completion, the bullet train will make 70 trips, 35 on each side between 6 am till 12 am. The ticket fare would be around Rs 3,000," he said.

According to him, tenders had been issued for four major civil work packages on the route and the construction work is likely to begin by March 2020. These packages include construction of a 237-km long viaduct between Vapi and Vadodara and another package between Vadodara and Ahmedabad with a distance of 87 kms, he said.

"We have divided the project into 27 packages. We have already issued tenders for four major civil work packages, including the under-sea tunnel in Maharashtra.

We hope that the work would start by March or April next year when the works will be awarded to the agencies," said Khare.

The present estimates suggest that the cost of the entire project would be Rs 1.08 lakh crore and attempts are being made to finish the project by December 2023, Khare said.

Commenting on the resentment among some farmers against land acquisition for the project, he said that farmers are not against giving their land. "Out of the around 5,300 private plots we are supposed to acquire in Gujarat, we have already acquired around 2,600 plots.

Gujarat farmers are not against the project. "Since 'jantri' rates (land rates fixed by the government) are not revised after 2011, they are demanding that these rates must be revised first before finalizing the compensation...," he said. He added that the issue has been largely resolved as out of the total 198 affected villages, the issue now persists in only 15 villages.

Khare exuded confidence that the project will not get delayed because of this issue. As part of the endeavor to save the environment, the NHSRCL has also deployed specially-designed vehicles to transplant large trees standing on the route. "So far, 4,000 large trees have been saved by way of transplantation at another location," said a release by the NHSRCL. Civil work for Ahmedabad High-Speed Railway Station has already begun at the existing railway station in the city.

This new railway station for the bullet train will be built over the existing railway lines on the eastern side above platform no 10, 11 and 12. The bullet train corridor will have 12 stations across its 508-km stretch between Ahmedabad and Mumbai.