As per the DGCA rules, an airline can put an unruly passenger on its no-fly list for a certain period of time after an internal enquiry 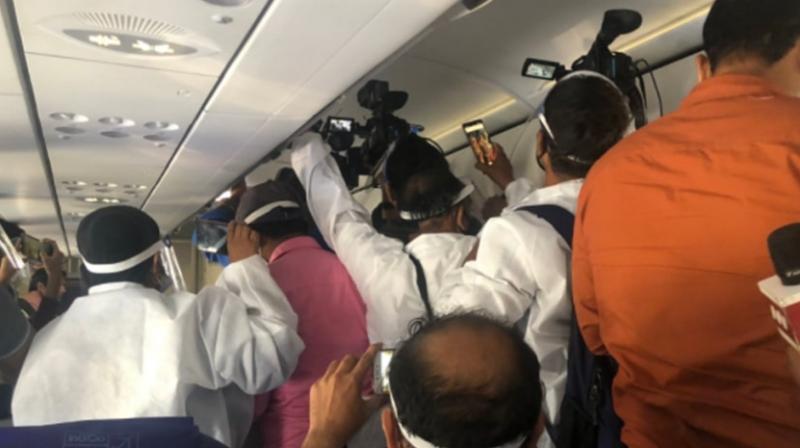 Screengrab from the viral video.

The Director General of Civil Aviation (DGCA) on Saturday warned all domestic airlines that their scheduled flights will be suspended for at least two weeks if anyone is found taking photographs or doing videography inside the plane.

The warning comes shortly after images of an incident where actress Kangana Ranaut was crowded by media persons in the Chandigarh-Mumbai IndiGo flight became viral on social media. Chandigarh is a defence airport where videography and photography is strictly prohibited.

A viral video of Wednesday's incident showed that reporters and camerapersons of various TV channels were jostling and bunching up near the front rows to get a comment from Ranaut after the plane landed at the Mumbai airport. The video purportedly showed that the actor was sitting in one of the front rows.

The DGCA has also sought an explanation from IndiGo with regard to photography on board in violation of Aircraft rules 13, violation of COVID-19 protocols and certain actions falling within the purview of unruly behaviour by passengers on board.

“It has been decided that from now on, in case any violation occurs on any scheduled passenger aircraft - the schedule of flight for that particular route shall be suspended for a period of two weeks from the next day (of the incident)," DGCA order said.

According to the DGCA order, as per Rule 13 of the Aircraft Rules 1937, no person is allowed to take any photographs inside a flight except when permission is granted by the DGCA or the Civil Aviation Ministry. This permission is, however, not applicable when the aircraft is landing, taking off or on ground on a defence aerodrome.

"In spite of these regulations, it has been noted that at times, the airlines have failed to follow these stipulations primarily because of lack of diligence on their part. Needless to say that such deviations result in compromise in maintaining the highest standards of safety and therefore, is not to be allowed," the order said.

The DGCA has put the onus on the airlines to ensure passengers adhere to the rules and regulations. The order said that if any incident of photography takes place inside any flight, that scheduled flight will be suspended for two weeks and it will be restored only after the airline has taken all the necessary punitive action against those responsible for the violation.

As per the DGCA rules, an airline can put an unruly passenger on its no-fly list for a certain period of time after an internal enquiry.