ICMR shocker: India missed 80 corona cases for every one detected

By that reckoning, 40 per cent of the population has been exposed to the virus 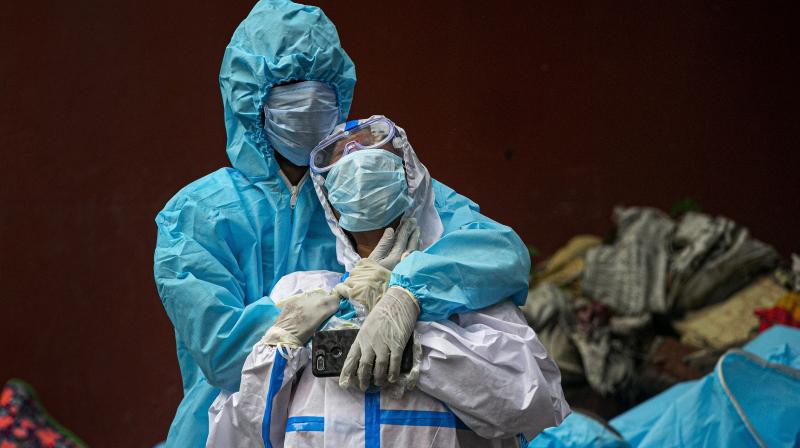 A woman wearing white protective gear, mourns after taking a glimpse of her husband's body, a victim of COVID 19, at a cremation site in Guwahati on Sept. 10, 2020. Experts caution that India's outbreak is entering a more dangerous phase as the virus spreads to smaller towns and villages. (AP)

Hyderabad: The Indian Council of Medical Research reckons, on the basis of its seroprevalence survey done in May-June, that 40 per cent of the Indian population is already exposed to the SARS-Cov 2 virus.

But the really scary part is this: for every confirmed case detected, there are 80-130 missed cases of coronavirus infection.

On Saturday morning, India's caseload, as per official state records, was 46.6 million. If multiplied it by ICMR's lower-range figure of 80, there are you'd have 372.8 million.

These are the results of India's first nationwide study of coronavirus infections. The study dates back to the May-June period when the pandemic was a gathering storm.

These missing cases include asymptomatic, mild or severe cases and deaths due  to COVID-19.

In contrast, the US is estimated to have 10 missed cases for every one confirmed case.

So why did we miss them? Indian Council of Medical Research says we missed the missed cases because we tested only those who had symptoms of severe and acute respiratory infection.

There is also a large variation in the testing methodology used by the states. Tests were carried out only on those people who showed symptoms and their contacts but community testing was not carried out which would have given a more accurate picture of the spread.

The missed cases mean that we missed a lot of COVID-19 deaths too. The ICMR findings show that mortality data is incomplete as many deaths were not attributed to Covid-19.

These findings have been published in the Indian Journal of Medical Research.

Throwing back to May, the study found that there were a cumulative 64,68,388 infections.

ICMR recommends that implementing context-specific containment measures including testing of all asymptomatic cases, isolating positive cases and tracing high-risk contacts is important to slow the transmission rate and overburdening of health systems.

Dr A. Velumani, scientist and managing director of Thyrocare Technologies Limited, said, “The exposure rate in May and June shows that the infection has spread in the population. Antibody prevalence as of September is 27 per cent. The movement of the virus has been very fast and we have to now look at controlling deaths. With greater unlocking the number of cases will rise but the number of deaths must not increase. Focus has to be on how to reduce
mortality.”