India   All India  12 Oct 2018  Can microhousing deliver on its promise?
India, All India

Can microhousing deliver on its promise?

The stresses on account of homelessness are mounting and India must summon the will and act fast. 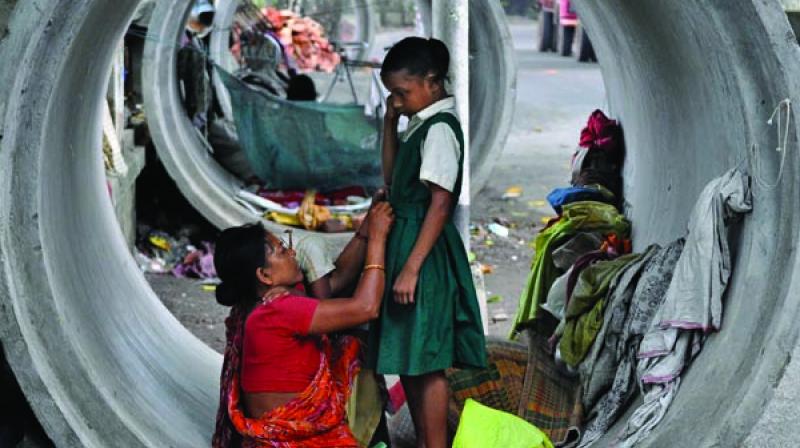 The poor and low-income people are shunned by mainstream financial institutions because they lack the requisite documents to attest their income.

Every day, more and more families find themselves in a struggle to keep a decent roof over their heads. There are millions of low-income families who live in overcrowded, inadequate and unsafe spatchcock dwellings made with cheap and fragile material like rotting wood and plastic coverings, crammed between dusty paths and open sewers with virtually no sanitation, environmental risk factors and lack of even the barest infrastructure. These are usually; socially homogenous encampments where the unskilled poor live among themselves, disconnected from others, making it harder for them to access the mainstream economy.

They experience exclusion, evictions, discrimination, insecure tenure, and lack of hope of accessing adequate and affordable housing in their lifetimes. They are under constant threat of being evicted without notice. A single eviction could destabilise multiple blocks not to account for the block to which the family is begrudgingly relocated. Most of their possessions — water containers, tents and other gear — are steamrolled by eviction agencies of the government. In Mumbai alone, there are over 2,379 major slum colonies, housing over 62 lakh people. The area of these pockets range from 318.50 sq. metre to 2.17 lakh sq. metre.

The President, in his address to the joint session of Parliament in June 2014, had announced that “by the time the nation completes 75 years of its Independence, every family will have a pucca house with water connection, toilet facilities, 24x7 electricity supply and access”. But the situation on the ground shows not much change even as the government has announced several policy saps. The number of people facing housing insecurity, is climbing more steeply as they struggle to make a choice between food on the table and a roof above their heads. A decent habitat and sheltered environment for low-income families can improve their well-being and catalyse overall economic growth. There is little more critical to a family’s quality of life than a healthy and safe living space. Living in substandard housing leads to a vicious cycle of debilitating problems. It is thus critical to recognise housing investment as a fundamental building block of economic activity.

People actually do not demand houses; they demand habitats. A house is an object; a habitat is a node in an ecosystem of overlapping networks — physical (roads, water, power and sanitation), economic (labour markets, urban transport, distribution and retail, entertainment) and social (education, health, security, family and friends). The ability to connect to all of these networks makes a habitat valuable.

House prices have been stretching further and further away from normal wages, making it difficult for low-income families to get on the housing ladder. Faced with the enormity of the housing need and financial weakness of those in need, the government builds low-income housing units and distributes them at very high levels of subsidy. With no clear definition and a lot of fudging, anything is possible. So, we get a plethora of “low-cost” home schemes with ambiguous rules for entitlement. Due to the high proportion of subsidy, only a few such units are built. The housing units are usually attractive to members of the middle class, who often maneuver the eligibility rules and succeed in displacing the intended beneficiaries.

We need a mass programme of social house building if we have to relieve the congestion of the homeless. Or still better, we should work on modest step-by-step upgrades to slums in partnership with residents replacing precarious cardboard or tin shanties with larger and higher-quality constructions.

The poor and low-income people are shunned by mainstream financial institutions because they lack the requisite documents to attest their income. They are seen by these institutions as both expensive to serve and risky as they have no capacity to make regular monthly payments over a long period of time. Further, they do not have the formal proof of land ownership. Finally, poor people find the procedures onerous.

The low-income households cannot afford resources for constructing a full unit. To manage this situation, the poor build their homes bit by bit over time as funding becomes available. Families might reinforce the walls or the roof to prevent seepage of water. They might replace a dirt floor with a tiled surface. Once the housing needs are suitably met they focus on sanitation and water supply, they construct a toilet, bathing place and construct a well. These can be financed as one individual module at a time. This method of improving housing one step at a time is called “incremental” or “progressive building”. The shorter-term loans enable different parts of the house to be built over a suitable period of time. A modular loan with shorter payback period is a better fit for their income pattern than a long-term mortgage.

Traditional housing finance has not offered products tailored to low-income people, but a range of financial institutions are applying good microfinance practices to housing finance. This is allowing them to successfully deliver the much-needed services to the poor customers. A new stream of lending has emerged, called housing microfinance. It draws on proven best practices in microfinance but adapted to the classical housing finance paradigm. This has been highly successful wherever governments are offering long-term tenancies and shared-ownership housing in a supportive context. But the sector is still in need of a more sustainable business model to grow.

Housing microfinance is broadly defined as small loans dedicated to housing activities, but not limited to repairing, improving or upgrading housing; investment in infrastructure; the purchase of inhabitable land or permanent structures; and the construction of new housing.

Housing microfinance offers small, incremental loans that fit with the way poor people build: progressively and over time. These include loans for relatively small amounts and based on clients’ capacity to repay, wherein loan pricing is expected to cover the real, long-run costs — operational and financial — of providing the service. Moreover, repayment periods are relatively short and are on par with mid to high-end microfinance individual loans. Loans finance habitat needs in an incremental manner with short repayment periods and relatively low monthly payments. Further, they are not heavily collateralised, if at all, and collateral substitutes are often used.

The demand for housing microfinance is high. Clients already channel a good portion of microenterprise loans to home improvement. Microentrepreneurs often use their homes as productive assets in generating income. A home can be a place to store inventory, produce goods and run a business. A home is a personal asset that usually appreciates in value over time. Home improvement, thus, not only enhances living conditions but is also an investment.

The challenges facing housing microfinance programmes include affordability constraints, especially for rural households; high land prices in the case of urban clients; commercial viability of the microfinance lenders; and need for new products, including savings-for-housing instruments, and for mechanisms limiting disaster and disability/death risk in housing lending. Careful blending of government policies, public-private partnerships, smart subsidies, planning and technical assistance for housing microlending would be required to further develop the low-income housing and housing finance markets.

Endowing slum dwellers with mortgageable titles can open the gates to numerous opportunities for improving health, education, employment and providing entitlements to social programmes. While formal land titles are not necessary for housing microfinance, land security is essential. We need to introduce policy reforms to stimulate private sector participation through creative partnerships and fruitful linkages for fostering a sound ecosystem for affordable housing. Given that legal status is a strong marker of deprivation, government schemes should target adequate resources to non-notified slums. The lack of defensible and documented rights (for example, property registration documents) denies slum dwellers benefits of the agglomeration economies that would boost their productivity. Therefore, they prefer to choose older homes in established neighbourhoods.

The stresses on account of homelessness are mounting and India must summon the will and act fast. Solutions will come from pairing passion with entrepreneurship and digging deep into the challenge at hand. We increasingly have the tools; but we need to summon the will and think out of the box. And don’t accept limits to how the world works.