The two leaders agreed that both countries should work together to deal with the challenge of terrorism. 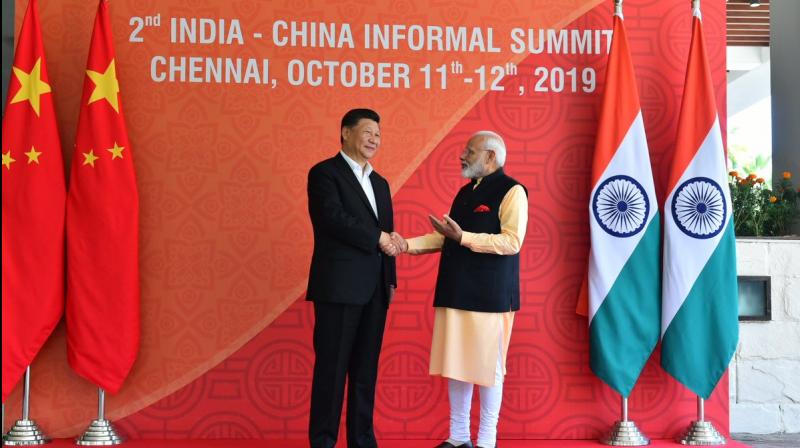 Both Xi and Modi said the two countries need to look to the future. (Photo: MEA | Twitter)

Mamallapuram: Prime Minister Narendra Modi and Chinese President Xi Jinping on Saturday agreed to set up a new mechanism for issues relating to trade and investment and felt the two countries should cooperate on important regional and global issues.

President Xi has said that China is ready to take concrete measures to reduce trade deficit, Foreign Secretary Vijay Gokhale told reporters at a briefing on the outcome of the second informal summit between the two leaders in this coastal town. Building on the 'Wuhan spirit', the prime minister spoke of "Chennai connect" for a new era of cooperation between India and China, he said.

Gokhale said a new mechanism will be set up for issues relating to trade and investment. President Xi has assured that India's concerns over Regional Comprehensive Economic Partnership (RCEP) will be discussed, he said. Both Modi and Xi emphasised on importance of having rules-based global trading system, he said, both leaders felt that the two countries should cooperate on important regional and global issues Xi also talked about the need for enhancing defence cooperation, Gokhale said.

Both Xi and Modi said the two countries need to look to the future. The two leaders agreed that both countries should work together to deal with the challenge of terrorism, Gokhale said. Replying to a query, he said Kashmir issue was not raised and discussed at the informal summit. Prime Minister Modi had around five-and-half hours of one-on-one talks with Chinese President Xi Jinping spread over two days. It was followed by delegation level talks.